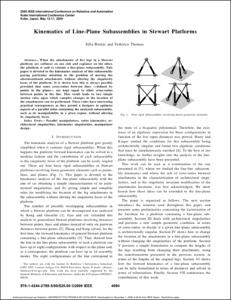 Document typeConference report
PublisherIEEE
Rights accessOpen Access
Abstract
When the attachments of five legs in a Stewart platform are collinear on one side and coplanar on the other, the platform is said to contain a line-plane subassembly. This paper is devoted to the kinematics analysis of this subassembly paying particular attention to the problem of moving the aforementioned attachments without altering the singularity locus of the platform. It is shown how this is always possible provided that some cross-ratios between lines -defined by points in the plane- are kept equal to other cross-ratios between points in the line. This result leads to two simple motion rules upon which complex changes in the location of the attachments can be performed. These rules have interesting practical consequences as they permit a designer to optimize aspects of a parallel robot containing the analyzed subassembly, such as its manipulability in a given region, without altering its singularity locus.
CitationBorras, J.; Thomas, F. Kinematics of line-plane subassemblies in Stewart platforms. A: IEEE International conference on Robotics and Automation. "2009 IEEE International Conference on Robotics and Automation". Kobe: IEEE, 2009, p. 4094-4099.
URIhttp://hdl.handle.net/2117/6398
ISBN978-1-4244-2789-5
Publisher versionhttp://dx.doi.org/10.1109/ROBOT.2009.5152355
Collections
Share: