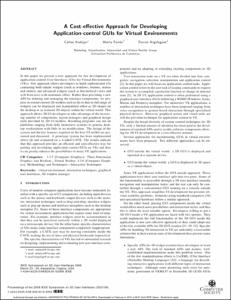 Argelaguet Sanz, Fernando
Document typeConference lecture
Rights accessOpen Access
Abstract
In this paper we present a new approach for fast development of application-control User Interfaces (UIs) for Virtual Environments (VEs). Our approach allows developers to build sophisticated UIs containing both simple widgets (such as windows, buttons, menus and sliders) and advanced widgets (such as hierarchical views and web browsers) with minimum effort. Rather than providing a new API for defining and managing the interface components, we propose to extend current 2D toolkits such as Qt so that its full range of widgets can be displayed and manipulated either as 2D shapes on the desktop or as textured 3D objects within the virtual world. This approach allows 3D UI developers to take advantage of the increasing number of components, layout managers and graphical design tools provided by 2D UI toolkits. Resulting programs can run on platforms ranging from fully immersive systems to generic desktop workstations with little or no modification. The design of the system and the key features required on the host UI toolkit are presented and discussed. A prototype system has been implemented above Qt and evaluated on a 4-sided CAVE. The results indicate that this approach provides an efficient and cost-effective way for porting and developing application-control GUIs on VEs and thus it can greatly enhance the possibilities of many VE applications.
CitationAndújar, C.; Fairén, M.; Argelaguet, F. A cost-effective approach for developing application-control GUIs for virtual environments. A: IEEE Symposium on 3D User Interfaces. "IEEE Symposium on 3D User Interfaces 2006". Alexandria, Virginia: 2006, p. 45-52.
URIhttp://hdl.handle.net/2117/6325
ISBN1-4244-0225-5
Publisher versionhttp://doi.ieeecomputersociety.org/10.1109/VR.2006.6
Collections
Share: