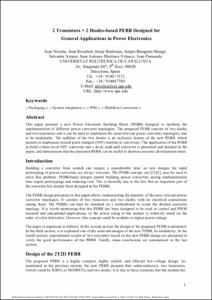 Except where otherwise noted, content on this work is licensed under a Creative Commons license : Attribution-NonCommercial-NoDerivs 3.0 Spain
Abstract
This paper presents a new Power Electronic Building Block (PEBB) designed to facilitate the implementation of different power converter topologies. The proposed PEBB consists of two diodes and two transistors and it can be used to implement the most relevant power converter topologies, due to its modularity. The addition of the two diodes is an exclusive feature of the new PEBB, which permits to implement neutral point clamped (NPC) multilevel converters. The application of the PEBB to build a three-level NPC converter and a dc-dc push-pull converter is presented and detailed in the paper, and demonstrate that the presented PEBB can be useful to shorten converter development times.
CitationNicolás-Apruzzese, J. [et al.]. 2 transistors + 2 diodes-based PEBB designed for general applications in power electronics. A: European Conference on Power Electronics and Applications. "13th European Conference on Power Electronics and Applications". Barcelona: 2009, p. 1-10.
URIhttp://hdl.handle.net/2117/6252
ISBN9789075815009
Collections
Share: