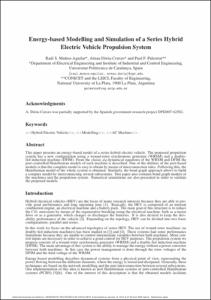 Puleston, Paul
Document typeConference lecture
Rights accessOpen Access
Abstract
This paper presents an energy-based model of a series hybrid electric vehicle. The proposed propulsion system has a new configuration using a wound-rotor synchronous generator (WRSM) and a doublyfed induction machine (DFIM). From the classic dq dynamical equations of the WRSM and DFIM the port-controlled Hamiltonian models of each machine is described. One of the abilities of the port-based models is that the complete model is easy to obtain by means of interconnection rules. Following this, the Hamiltonian model of the whole system is obtained. Similarly, the bond graph approach allows to build a complex model by interconnecting several subsystems. This paper also contains bond graph models of the machines and the propulsion system. Numerical simulations are also presented in order to validate the proposed models.
CitationMuñoz, R.; Doria-Cerezo, A.; Puleston, P. Energy-based modelling and simulation of a series hybrid electric vehicle propulsion system. A: European Conference on Power Electronics and Applications. "13th European Conference on Power Electronics and Applications". Barcelona: 2009, p. 1-10.
URIhttp://hdl.handle.net/2117/6232
ISBN97890758115009
Publisher versionhttp://ieeexplore.ieee.org/stamp/stamp.jsp?tp=&arnumber=5278838&isnumber=5278662
Collections
Share: