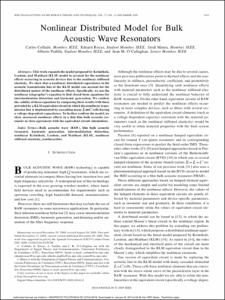 Document typeArticle
Rights accessOpen Access
Abstract
This work expands the model proposed by Krimtholz, Leedom, and Matthaei (KLM) model to account for the nonlinear effects occurring in acoustic devices due to the nonlinear stiffened elasticity.We show that a nonlinear distributed capacitance in the acoustic transmission line of the KLM model can account for the distributed nature of the nonlinear effects. Specifically, we use the nonlinear telegrapher’s equation to find closed-form equations for intermodulation distortion and harmonic generation. We confirm the validity of these equations by comparing their results with those provided by aKLMequivalent circuit in which the nonlinear transmission line is implemented by cascading many L-C cells having a voltage-dependent capacitance. To further confirm the model, we show measured nonlinear effects in a thin film bulk acoustic resonator in close agreement with the equivalent circuit simulations.
CitationCollado, J. [et al.]. Nonlinear distributed model for bulk acoustic wave resonators. "IEEE transactions on microwave theory and techniques", Desembre 2009, vol. 57, núm. 12, p. 3019-3029.
URIhttp://hdl.handle.net/2117/6226
DOI10.1109/TMTT.2009.2034211
ISSN0018-9480
Publisher versionhttp://ieeexplore.ieee.org/search/srchabstract.jsp?arnumber=5332259&isnumber=5340252&punumber=22&k2dockey=5332259@ieeejrns&query=5332259%3Cin%3Earnumber&pos=0
Collections
Share: