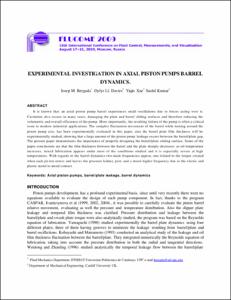 It is known that an axial piston pump barrel experiences small oscillations due to forces acting over it. Cavitation als o occurs in many cases, damaging the plate and barrel sliding surfaces and therefore reducing the volumetric and overall efficiency of the pump. More importantly, the resulting failure of the pump is often a critical issue in modern industrial applications. The complex fluctuation movement of the barrel while turning around the piston pump axis, has been experimentally evaluated in this paper, also the barrel plate film thickness will be experimentally studied, showing that a large amount of the piston pump leakage occurs between the barrel/plate gap. The present paper demonstrates the importance of properly designing the barrel/plate sliding surface. Some of the paper conclusions are that the film thickness between the barrel and the plate sharply decreases as oil temperature increases, mixed lubrication appears under most of the conditions studied and it is especially severe at high temperatures. With regards to the barrel dynamics two main frequencies appear, one related to the torque created when each pis ton enters and leaves the pressure kidney port, and a much higher frequency due to the elastic and plastic metal to metal contact.
CitationBergada, J. [et al.]. Experimental investigation in axial piston pumps barrel dynamics. A: International Conference on Fluid Control, Measurements and Visualization. "10th International Conference on Fluid Control, Measurements and Visualization". Moscow: 2009, p. 1-6.
URIhttp://hdl.handle.net/2117/6218
Publisher versionhttp://www.ihed.ras.ru/flucome10/cd/papers/160.pdf