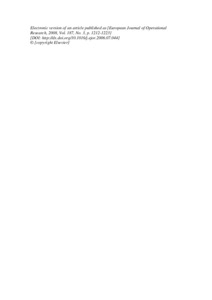 Document typeArticle
PublisherElsevier
Rights accessOpen Access
All rights reserved. This work is protected by the corresponding intellectual and industrial property rights. Without prejudice to any existing legal exemptions, reproduction, distribution, public communication or transformation of this work are prohibited without permission of the copyright holder
Abstract
The classical Simple Assembly Line Balancing Problem (SALBP) has been widely enriched over the past few years with many realistic approaches and much effort has been made to reduce the distance between the academic theory and the industrial reality. Despite this effort, the scheduling of the execution of tasks assigned to every workstation following the balancing of the assembly line has been scarcely reported in the scientific literature. This is supposed to be an operational concern that the worker should solve himself, but in several real environments, setups between tasks exist and optimal or near-optimal tasks schedules should be provided inside each workstation. The problem presented in this paper adds sequence-dependent setup time considerations to the classical SALBP in the following way: whenever a task is assigned next to another at the same workstation, a setup time must be added to compute the global workstation time. After formulating a mathematical model for this innovative problem and showing the high combinatorial nature of the problem, eight different heuristic rules and a GRASP algorithm are designed and tested for solving the problem in reasonable computational time.
CitationAndres, C.; Miralles, C.; Pastor, R. "Balancing and scheduling tasks in assembly lines with sequence-dependent setup times". European Journal of Operational Research, 2008, Vol. 187, No. 3, p. 1212-1223.
URIhttp://hdl.handle.net/2117/6078
ISSN0377-2217
Publisher versionhttp://dx.doi.org/10.1016/j.ejor.2006.07.044
Collections
Share: