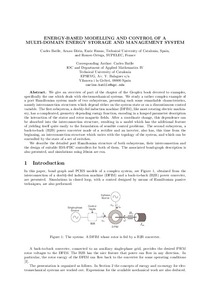 Ortega, Romeo
Document typeConference report
PublisherInge Troch, Felix Breitenecker
Rights accessOpen Access
Abstract
We give an overview of part of the chapter of the Geoplex book devoted to examples, specifically the one which deals with electromechanical systems. We study a rather complex example of a port Hamiltonian system made of two subsystems, presenting each some remarkable characteristics, namely interconnection structures which depend either on the system state or on a discontinuous control variable. The first subsystem, a doubly-fed induction machine (DFIM), like most rotating electric machinery, has a complicated, geometry depending energy function, encoding in a lumped parameter description the interaction of the stator and rotor magnetic field. After a coordinate change, this dependence can be absorbed into the intercommunication structure, resulting in a model which has the additional feature of yielding itself quite easily to the formulation of sensible control problems. The second subsystem, a back-to-back (B2B) power converter made of a rectifier and an inverter, also has, this time from the beginning, an interconnection structure which caries the topology of the system, and which can be controlled by the state of a set of switches. We describe the detailed port Hamiltonian structure of both subsystems, their interconnection and the design of suitable IDA.PBC controllers for both of them. The associated bond-graph description is also presented, and simulations using 20sim are run
CitationCarles Batlle, Arnau Dòria, Enric Fossas, Romeo Ortega. Energy-based modelling and control of a multi-domain energy storage and management system. A Proceedings 5th. MATHMOD Vienna, Symposium on Mathematical Modelling. Vienna : ARGESIM, 2006. p.233
URIhttp://hdl.handle.net/2117/475
Collections
Share: