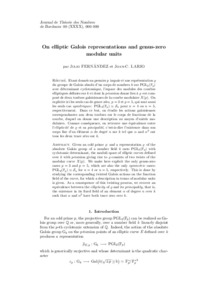 Document typeArticle
Rights accessOpen Access
Abstract
Given an odd prime \,$p$\, and a representation $\varrho$\, of the absolute Galois group of a number field $k$ onto $\mathrm{PGL}_2(\mathbb{F}_p)$ with cyclotomic determinant, the moduli space of elliptic curves defined over $k$ with $p$-torsion giving rise to $\varrho$ consists of two twists of the modular curve $X(p)$. We make here explicit the only genus-zero cases $p=3$ and $p=5$, which are also the only \emph{symmetric} cases: $\mathrm{PGL}_2(\mathbb{F}_p)\simeq\mathcal{S}_n$ for $n=4$ or $n=5$, respectively. This is done by studying the corresponding twisted Galois actions on the function field of the curve, for which a description in terms of modular units is given. As a consequence of this twisting process, we recover an equivalence between the \emph{ellipticity} of $\varrho$ and its \emph{principality}, that is, the existence in its fixed field of an element $\alpha$ of degree $n$ over~$k$\, such that $\alpha$ and $\alpha^2$ have both trace zero over $k$.
URIhttp://hdl.handle.net/2117/473
Collections
Share: