The country factor on regional income distributions in Europe: A functional ANOVa approach 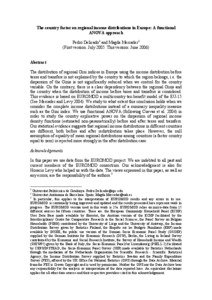 Except where otherwise noted, content on this work is licensed under a Creative Commons license : Attribution-NonCommercial-NoDerivs 2.5 Spain
Abstract
The distribution of regional Gini indices in Europe using the income distribution before taxes and transfers is not explained by the country to which the region belongs, i.e. the dispersion of the Ginis is not significantly reduced when we control for the country variable. On the contrary, there is a clear dependency between the regional Ginis and the country when the distribution of income before taxes and transfers is considered. This evidence is based on EUROMOD a multicountry tax-benefit model of the EU-15 (See Mercader and Levy 2004). We study to what extent this conclusion holds when we consider the complete income distributions instead of a summary inequality measure such as the Gini index. We use functional ANOVA (following Cuevas et al. 2004) in order to study the country explicative power on the dispersion of regional income density functions (estimated non-parametrically) before and after taxes and transfers. Our statistical evidence suggests that regional income distributions in different countries are different, both before and after redistribution takes place. However, the null assumption of equality of mean regional distributions among countries (a factor country equal to zero) is rejected more strongly in the after distribution case.
URIhttp://hdl.handle.net/2117/413
Collections
Share: