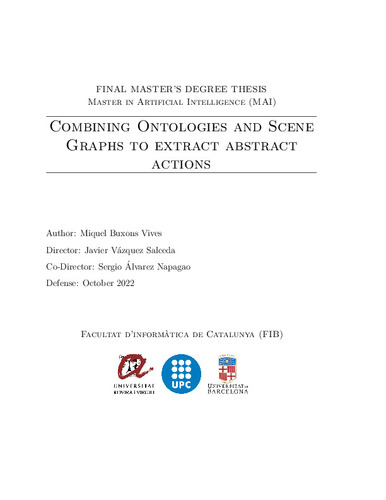 Document typeMaster thesis
Rights accessOpen Access
All rights reserved. This work is protected by the corresponding intellectual and industrial property rights. Without prejudice to any existing legal exemptions, reproduction, distribution, public communication or transformation of this work are prohibited without permission of the copyright holder
Abstract
Make a machine to understand what is happening on a visual recording is one of the most ambitious goals pursued by the Computer Vision research field. This incredibly complex task requires the application of several different techniques, from the object detection, through the definition of the relationships that these objects can have in the scene, including the application of knowledge that allows adding different sets of relationships to compose abstract and compound actions (such as washing clothes or getting ready to go out on the street). In this context, Scene Graphs techniques have been proposed in literature. Their ap- proach is to capture the different relations that appear in a scene with the aim of aggregating them inside a graph which allow us to define a visual scene. Nowadays, the state-of-the-art methods hardly rely on prior knowledge extracted from the training step, this knowledge is clearly biased into the training set. Because of that, Scene Graph Generation models have a hard time correctly defining relationships between previously unseen objects. In recent years, a branch of models has emerged that attempt to apply common-sense knowledge techniques to try to lower the dependency of Scene Graph Generation models on prior bias. This project describes and tests the most recent Common-sense techniques applied to scene graph generation, and then proposes a new technique: Generalized Action Graphs (GAG). The work also implements a recently published metric that allows measuring the generalization of a Scene Graph Generation model.
SubjectsDeep Learning, Computer vision, Aprenentatge profund, Visió per ordinador
DegreeMÀSTER UNIVERSITARI EN INTEL·LIGÈNCIA ARTIFICIAL (Pla 2017)
URIhttp://hdl.handle.net/2117/381041
Collections
Share: