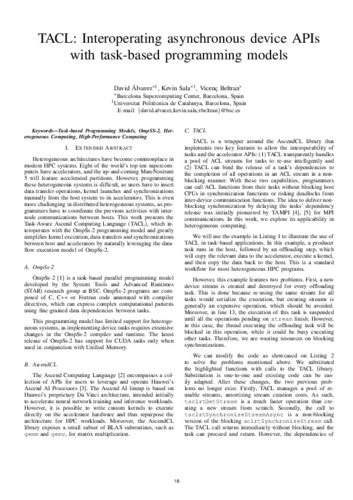 Except where otherwise noted, content on this work is licensed under a Creative Commons license : Attribution-NonCommercial-NoDerivs 4.0 International
Abstract
Heterogeneous architectures have become commonplace in modern HPC systems. Eight of the world’s top ten supercomputers have accelerators, and the up-and-coming MareNostrum 5 will feature accelerated partitions. However, programming these heterogeneous systems is difficult, as users have to insert data transfer operations, kernel launches and synchronizations manually from the host system to its accelerators. This is even more challenging in distributed heterogeneous systems, as programmers have to coordinate the previous activities with internode communications between hosts. This work presents the Task-Aware Ascend Computing Language (TACL), which interoperates with the OmpSs-2 programming model and greatly simplifies kernel execution, data transfers and synchronizations between host and accelerators by naturally leveraging the dataflow execution model of OmpSs-2.
CitationAlvarez, D.; Sala Penadés, K.; Beltran, V. TACL: Interoperating asynchronous device APIs with task-based programming models. A: . Barcelona Supercomputing Center, 2022, p. 18-19.
URIhttp://hdl.handle.net/2117/381039
Collections
Share: