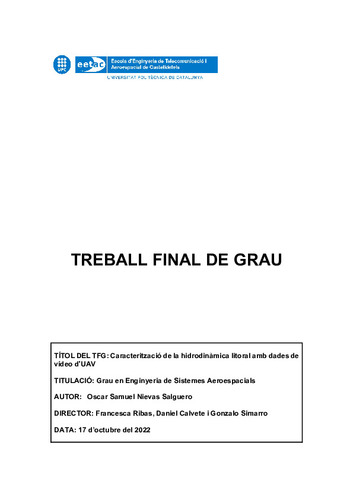 Except where otherwise noted, content on this work is licensed under a Creative Commons license : Attribution-NonCommercial-ShareAlike 3.0 Spain
Abstract
This work aims to explore the potential of UAV-captured videos for the characterization of shoreline dynamics at time scales of seconds to minutes. A 2 min video recorded by a UAV at Playa de la Victoria in Cádiz, on a day when there were beach cusps, was used. To begin, the images corresponding to the frames of the video to be analyzed were extracted and calibrated. For this, two software from GitHub were used. The first of them is called UClick and it allows to manually calibrate a subset of frames. The second is called Udrone and allows you to calibrate all the other frames from the previous subset and make planviews (images with a zenith view) of the different areas to be studied: an area around the coastline and an area at open sea. The second step was to develop a Python code for the automatic detection of the coastline from the planviews of this area. Currently, there is no standard methodology to automatically detect the coastline. In this work, image processing tools have been used, such as filters, and two different methodologies have been applied to be able to compare the results. The first is based on the calculation of the gradient of different channels that characterize the colours of the image and that change rapidly around the coastline. The second is based on classifying the pixels between sea and land according to a combination of two colour channels. The best method for coastline detection has turned out to be the gradient of the Red/Green channel, a channel widely used for these applications. The RMSE (Root Mean Square Error) obtained in four frames, which have been taken as an example, have been from 0.4 to 9.7 meters. Next, the dynamics of the line have been characterized using an EOF (Empirical Orthogonal Functions) decomposition through an already existing code. In both shoreline extraction methodologies, the first EOF has been seen to describe a significant percentage of variance and can therefore be considered to represent a significant portion of the dynamics. In fact, the spatial distribution of the first EOF captures the cusps that were present at "Playa de la Victoria". Doing the Fourier transform of the temporal distribution of the first EOF, it was obtained that the dominant periods were 13.5, 10.1 and 8.7 seconds. Finally, the open sea swell periods have been characterized to be able to compare them with the coastline oscillation periods. To do this, the DMD of the open sea planviews have been calculated with part of the UBathy software, also obtained from GitHub. The dominant periods extracted from the DMD were found to be in 13.1, 6.4 and 4.4 seconds. The software has also been applied to planviews of the area around the coastline to compare with the result of the EOFs of the extracted coastlines. From this area it has been obtained that the dominant periods extracted from the DMD are in the intervals from 5.6 to 6 and from 13.6 to 14.2 seconds. This work demonstrates the feasibility of using UAV videos to detect the periods of swash zone oscillation due to incident swell.
SubjectsCoast changes, Costes--Hidrodinàmica--Models matemàtics
DegreeGRAU EN ENGINYERIA DE SISTEMES AEROESPACIALS (Pla 2015)
Location
1: P.º Marítimo, 23, 11011 Cádiz, Espanya
URIhttp://hdl.handle.net/2117/377045
Collections
Share: