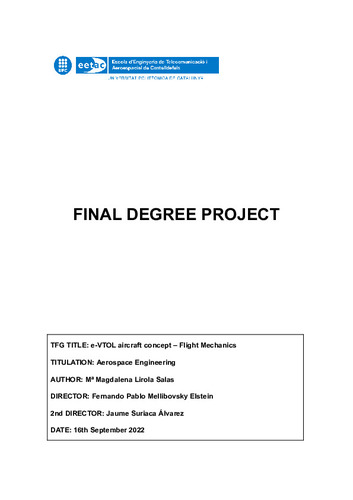 Except where otherwise noted, content on this work is licensed under a Creative Commons license : Attribution-NonCommercial-ShareAlike 3.0 Spain
Abstract
This project is based on a collaboration through the Universitat Politècnica de Catalunya and ONAerospace. This is the preliminary design concept for an e-VTOL (All-electric Vertical Take-Off and Landing) aircraft. Therefore, in order to carry it out, it has been decided to organize it with 4 divisions: aerodynamics, propulsion, flight mechanics and avionics. The first e-VTOL was patented by Nikola Tesla in 1928. Since then, these planes have been varying and developing. Nowadays, they have been approached in a different way than they were previously. Now, several companies are investing in the research of these aircraft, as a new idea of ¿¿aerotaxi is emerging. One of these companies is ONA Aerospace, which is being collaborated with on this project. Therefore, we want to focus on this e-VTOL not only as an air taxi, but also as a rescue aircraft. The main objective of this project is to make the initial study of the flight mechanics of this e-VTOL aircraft. In other words, study its mechanics by establishing the body axes and wind axes of the aircraft and stipulating the different equations of motion. On the other hand, it is also necessary to study the different performances, since one of the most significant characteristics of the e-VTOL, which in fact makes this aircraft called an e-VTOL, is the take-off and vertical landing. In addition, together with the Aerodynamics Department, the study of stability and control has been carried out. From the aerodynamics side, a CFD simulation has been prepared using ANSYS software to obtain several parameters with which, in this project, it has been studied whether they met the conditions to obtain a longitudinal stability behavior. In addition, in this project a CFD simulation has been carried out for the design of the vertical tail in order to study the lateral-directional stability. Finally, the different moment coefficients have been studied to determine the maneuverability of the aircraft. It has been possible to confirm and conclude that the e-VTOL is stable both longitudinally, laterally and directionally and for pulling and turning maneuvers. In addition, in the transition phase there is a loss of lift because the rear engines are tilting, but this tilt will introduce a forward thrust that will allow the wings and canards to start generating lift.
SubjectsVertically rising aircraft, Aerodinàmica
DegreeGRAU EN ENGINYERIA DE SISTEMES AEROESPACIALS (Pla 2015)
URIhttp://hdl.handle.net/2117/377043
Collections
Share: