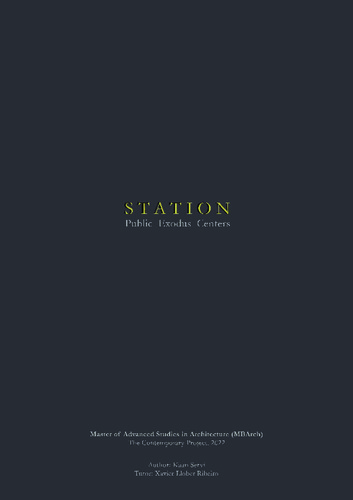 Except where otherwise noted, content on this work is licensed under a Creative Commons license : Attribution-NonCommercial-NoDerivs 4.0 International
Abstract
Research focuses on the renovation of the abandoned or disused 19th-century railway stations to adapt them into the contemporary city as public exodus centers. The birth of railroad transportation became an evolution in transportation history, which was followed by the appearance of railway stations which evolved from simple cottages to cathedrals and palaces. Due to their “node” and “place” characters, station buildings became a convergence place of various social classes during history until the fall of railroad transportation in mid of 20th century and the abandonment of railway stations. On the contrary, stations, rather than being places keeping people away, have a very powerful potential to be hedonistic public spaces in contemporary cities through the five qualities that station buildings have. Thus, the research examines deeply three case studies that follow different strategies for the readaptation of abandoned 19th-century stations. Atocha Railway Station has been extended linearly behind the former station, and the historical building is used as a public space amidst the tropical garden. Railroads in Orsay Station have been moved laterally under the ground level, and the former station transformed into a museum which is a contemporary public space. The last case study, which is proposed by the author in Haydarpasa Railway Station, creates a new centrality by detaching the station terminal from the historical building. The former station is functioned as a cultural center, while the public space between the old and new station becomes a convergence place. Since railroad transportation is the strongest candidate to be the main actor of green and sustainable transportation in the near future, most 19th-century station buildings would gain importance to be the central point of dense transportation traffic. Thus, renovation of former stations as public exodus centers defines them as a meeting place for society and the city.
Description
MBArch - Màster Universitari en Estudis Avançats en Arquitectura-Barcelona: The Contemporary Project
SubjectsRailroad stations -- Remodeling for other use -- Spain -- Madrid, Railroad stations -- Remodeling for other use -- France -- Paris, Railroad stations -- Remodeling for other use -- Turkey -- Istanbul, Public spaces, Urban renewal, Estacions de ferrocarrils -- Reconversió -- Madrid (Comunitat autònoma) -- Madrid, Estacions de ferrocarrils -- Reconversió -- França -- París, Estacions de ferrocarrils -- Reconversió -- Turquia -- Istanbul, Espais públics, Rehabilitacíó urbana
DegreeMÀSTER UNIVERSITARI EN ESTUDIS AVANÇATS EN ARQUITECTURA-BARCELONA (Pla 2015)
Location
1: Atocha cercanias, Atocha, 28045 Madrid, Espanya
2: 72 Pl. Henry de Montherlant, 75007 Paris, França
3: Rasimpaşa, TCDD Haydarpaşa Garı, 34716 Kadıköy/İstanbul, Turquia
Award-winningAward-winning
URIhttp://hdl.handle.net/2117/376708
Collections
Share: