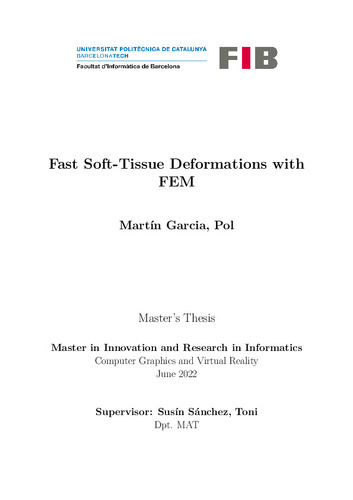 Document typeMaster thesis
Rights accessOpen Access
All rights reserved. This work is protected by the corresponding intellectual and industrial property rights. Without prejudice to any existing legal exemptions, reproduction, distribution, public communication or transformation of this work are prohibited without permission of the copyright holder
Abstract
Soft body simulation has been a very active research area in computer animation since Baraff and Witkin's 1998 work on cloth simulation, which led Pixar to start using such techniques in all of its animated movies that followed. Many challenges in these simulations come from different roots. From a numerical point of view, deformable systems are large sparse problems that can become numerically unstable at surprising rates and may need to be modified at each time-step. From a mathematical point of view, hyperelastic models defined by continuum mechanics need to be derived, established and configured. And from the geometric side, physical interaction with the environment and self-collisions may need to be detected and introduced into the solver. It is a fact that the Computer Graphics academia primarily focuses on offline methods, both for rendering and simulation. At the same time, the advances from the industry mainly apply to real-time rendering. However, we wondered how such high-quality simulation methods would map to a real-time use case. In this thesis, we delve into the simulation system used by Pixar's Fizt2 simulator, based on the Finite Element Method, and investigate how to apply the same techniques in real-time while preserving robustness and fidelity, altogether providing the user with some interaction mechanisms. A 3D engine for simulating deformable materials has been developed following the described models, with an interactive interface that allows the definition and configuration of scenes and later interaction with the simulation.
SubjectsFinite element method, Computer graphics, Elasticity, Elements finits, Mètode dels, Infografia, Elasticitat
DegreeMÀSTER UNIVERSITARI EN INNOVACIÓ I RECERCA EN INFORMÀTICA (Pla 2012)
URIhttp://hdl.handle.net/2117/376516
Collections
Share: