Contribution to the development of a drone engineering station 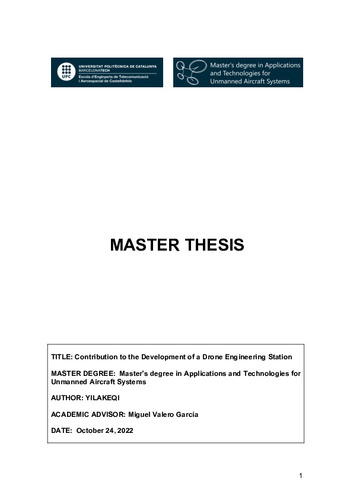 Except where otherwise noted, content on this work is licensed under a Creative Commons license : Attribution-NonCommercial-NoDerivs 3.0 Spain
Abstract
Unmanned Aerial Vehicles (UAVs) are aircrafts that can be remotely controlled by a person. Due to its versatility, it is gaining in significance in the present day. Applications include aerial photography, transportation, surveillance, farming, husbandry, and business. Generally, there are several reasons why drones are used widely. First, because of the portability, it makes people really easy to take it almost everywhere that humans can be there. Second, low cost is the biggest part of the reason, in terms of, the prices of drones, and short learning time for operation. The Drone Engineering System (DEE) is a set of software that can control drones including creating flight plans, recording data, and organizing the collected data. The initial version of the DEE is developed by the ICARUS group which belongs to Castelldefels School of Telecommunications and Aerospace Engineering. So, the future developments will be based on that version of the system and future versions also will belong to the ICARUS. With the purpose of offering values to society, the objectives of this master thesis will be basic improvement based on the initial version of DEE, gesture control which can make the user operate the drone with a hand, and face identification that can indicate the names of the faces rather than located them. In this project, the last objective can be done with the ground station camera. In the future, when the object tracking functionality will be developed, those could be done with the onboard camera. The whole project consists of two different parts, the onboard software, and the ground software. The onboard software can control the drone or the payloads by the onboard computer, in this case, Raspberry Pi. The ground software can be operated by the user to communicate with the onboard software. The project is developed in Python 2.7 and 3.9, since the DroneKit library is not compatible with Python 3.9. The message broker is Mosquitto that implements MQTT protocol. During the process, I learned a lot about the new technologies since they are new technologies and knowledge for me. It makes me understand more deeply about coding than before and inspired me from different perspectives.
SubjectsDrone aircraft., Avions no tripulats
DegreeMÀSTER UNIVERSITARI EN APLICACIONS I TECNOLOGIES PER ALS SISTEMES AERIS NO TRIPULATS (DRONS) (Pla 2017)
URIhttp://hdl.handle.net/2117/376354
Collections
Share: