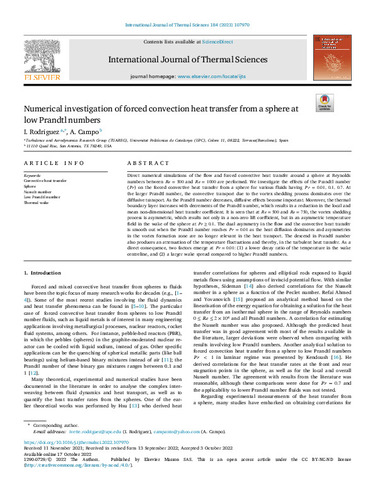 Except where otherwise noted, content on this work is licensed under a Creative Commons license : Attribution-NonCommercial-NoDerivs 4.0 International
ProjectTOWARDS REAL-TIME ACTUATION STRATEGIES FOR FLOW CONTROL AND NOISE REDUCTION IN AIRCRAFTS. (AEI-PID2020-116937RB-C22)
Abstract
Direct numerical simulations of the flow and forced convective heat transfer around a sphere at Reynolds numbers between 𝑅𝑒 = 500 and 𝑅𝑒 = 1000 are performed. We investigate the effects of the Prandtl number (𝑃 𝑟) on the forced convective heat transfer from a sphere for various fluids having 𝑃 𝑟 = 0.01, 0.1, 0.7. At the larger Prandtl number, the convective transport due to the vortex shedding process dominates over the diffusive transport. As the Prandtl number decreases, diffusive effects become important. Moreover, the thermal boundary layer increases with decrements of the Prandtl number, which results in a reduction in the local and mean non-dimensional heat transfer coefficient. It is seen that at 𝑅𝑒 = 500 and 𝑅𝑒 = 750, the vortex shedding process is asymmetric, which results not only in a non-zero lift coefficient, but in an asymmetric temperature field in the wake of the sphere at 𝑃 𝑟 ≥ 0.1. The dual asymmetry in the flow and the convective heat transfer is smooth out when the Prandtl number reaches 𝑃 𝑟 = 0.01 as the heat diffusion dominates and asymmetries in the vortex formation zone are no longer relevant in the heat transport. The descend in Prandtl number also produces an attenuation of the temperature fluctuations and thereby, in the turbulent heat transfer. As a direct consequence, two factors emerge at 𝑃 𝑟 = 0.01: (1) a lower decay ratio of the temperature in the wake centreline, and (2) a larger wake spread compared to higher Prandtl numbers.
CitationRodriguez, I.; Campo, A. Numerical investigation of forced convection heat transfer from a sphere at low Prandtl numbers. "International journal of thermal sciences", Febrer 2023, vol. 184, núm. article 107970, p. 1-14.
URIhttp://hdl.handle.net/2117/375226
DOI10.1016/j.ijthermalsci.2022.107970
ISSN1290-0729
Publisher versionhttps://www.sciencedirect.com/science/article/pii/S1290072922004987
Collections
Share: