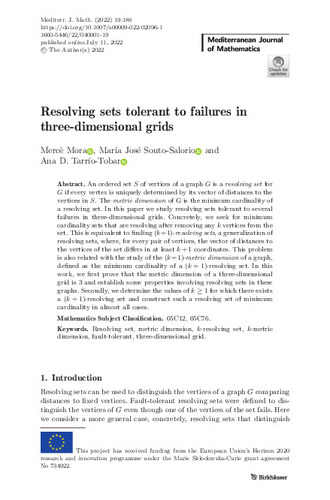 Souto Salorio, María josé
Tarrío Tobar, Ana Dorotea
Document typeArticle
PublisherSpringer Nature
Rights accessOpen Access
All rights reserved. This work is protected by the corresponding intellectual and industrial property rights. Without prejudice to any existing legal exemptions, reproduction, distribution, public communication or transformation of this work are prohibited without permission of the copyright holder
ProjectCONNECT - Combinatorics of Networks and Computation (EC-H2020-734922)
Abstract
An ordered set S of vertices of a graph G is a resolving set for G if every vertex is uniquely determined by its vector of distances to the vertices in S. The metric dimension of G is the minimum cardinality of a resolving set. In this paper we study resolving sets tolerant to several failures in three-dimensional grids. Concretely, we seek for minimum cardinality sets that are resolving after removing any k vertices from the set. This is equivalent to finding (k+1)-resolving sets, a generalization of resolving sets, where, for every pair of vertices, the vector of distances to the vertices of the set differs in at least k + 1 coordinates. This problem is also related with the study of the (k+1)-metric dimension of a graph, defined as the minimum cardinality of a (k + 1)-resolving set. In this work, we first prove that the metric dimension of a three-dimensional grid is 3 and establish some properties involving resolving sets in these graphs. Secondly, we determine the values of k = 1 for which there exists a (k + 1)-resolving set and construct such a resolving set of minimum cardinality in almost all cases.
Description
The version of record is available online at: http://dx.doi.org/10.1007/s00009-022-02096-1
CitationMora, M.; Souto-Salorio, M.J.; Tarrío-Tobar, A.D. Resolving sets tolerant to failures in three-dimensional grids. "Mediterranean journal of mathematics", 11 Juliol 2022, vol. 19, núm. 188.
URIhttp://hdl.handle.net/2117/374711
DOI10.1007/s00009-022-02096-1
ISSN1660-5454
Publisher versionhttps://link.springer.com/article/10.1007/s00009-022-02096-1
Collections
Share: