A feasibility study to assess the effectiveness of Muvity: A telerehabilitation system for chronic post-stroke subjects 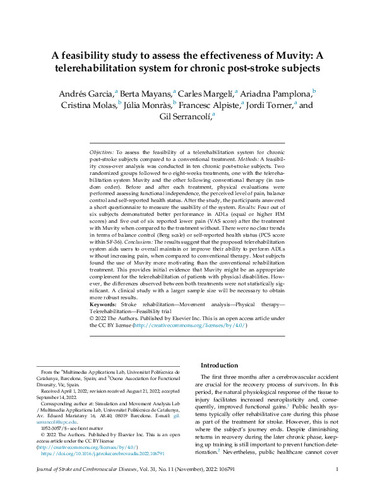 Except where otherwise noted, content on this work is licensed under a Creative Commons license : Attribution 4.0 International
Abstract
Objectives To assess the feasibility of a telerehabilitation system for chronic post-stroke subjects compared to a conventional treatment. Methods A feasibility cross-over analysis was conducted in ten chronic post-stroke subjects. Two randomized groups followed two eight-weeks treatments, one with the telerehabilitation system Muvity and the other following conventional therapy (in random order). Before and after each treatment, physical evaluations were performed assessing functional independence, the perceived level of pain, balance control and self-reported health status. After the study, the participants answered a short questionnaire to measure the usability of the system. Results Four out of six subjects demonstrated better performance in ADLs (equal or higher FIM scores) and five out of six reported lower pain (VAS score) after the treatment with Muvity when compared to the treatment without. There were no clear trends in terms of balance control (Berg scale) or self-reported health status (PCS score within SF-36). Conclusions The results suggest that the proposed telerehabilitation system aids users to overall maintain or improve their ability to perform ADLs without increasing pain, when compared to conventional therapy. Most subjects found the use of Muvity more motivating than the conventional rehabilitation treatment. This provides initial evidence that Muvity might be an appropriate complement for the telerehabilitation of patients with physical disabilities. However, the differences observed between both treatments were not statistically significant. A clinical study with a larger sample size will be necessary to obtain more robust results.
CitationGarcía, A. [et al.]. A feasibility study to assess the effectiveness of Muvity: A telerehabilitation system for chronic post-stroke subjects. "Journal of stroke and cerebrovascular diseases", 22 Setembre 2022, vol. 31, núm. 11, p. 106791:1-106791:11.
URIhttp://hdl.handle.net/2117/374565
DOI10.1016/j.jstrokecerebrovasdis.2022.106791
ISSN1052-3057
Publisher versionhttps://www.sciencedirect.com/science/article/pii/S1052305722004852
Collections
Share: