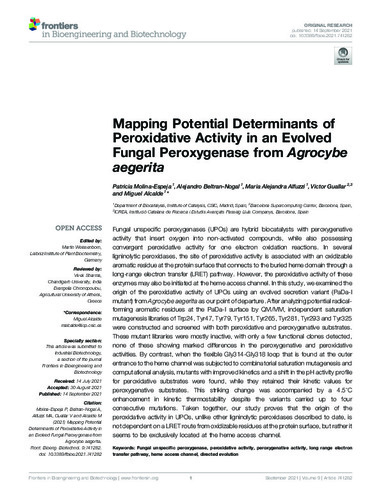 Except where otherwise noted, content on this work is licensed under a Creative Commons license : Attribution 4.0 International
ProjectINGENIERIA DE PLURIZYMES PARA LA GENERACION DE BIOPRODUCTOS A PARTIR DE RESIDUOS ORGANICOS (AEI-PID2019-106370RB-I00)
Abstract
Fungal unspecific peroxygenases (UPOs) are hybrid biocatalysts with peroxygenative activity that insert oxygen into non-activated compounds, while also possessing convergent peroxidative activity for one electron oxidation reactions. In several ligninolytic peroxidases, the site of peroxidative activity is associated with an oxidizable aromatic residue at the protein surface that connects to the buried heme domain through a long-range electron transfer (LRET) pathway. However, the peroxidative activity of these enzymes may also be initiated at the heme access channel. In this study, we examined the origin of the peroxidative activity of UPOs using an evolved secretion variant (PaDa-I mutant) from Agrocybe aegerita as our point of departure. After analyzing potential radical-forming aromatic residues at the PaDa-I surface by QM/MM, independent saturation mutagenesis libraries of Trp24, Tyr47, Tyr79, Tyr151, Tyr265, Tyr281, Tyr293 and Tyr325 were constructed and screened with both peroxidative and peroxygenative substrates. These mutant libraries were mostly inactive, with only a few functional clones detected, none of these showing marked differences in the peroxygenative and peroxidative activities. By contrast, when the flexible Gly314-Gly318 loop that is found at the outer entrance to the heme channel was subjected to combinatorial saturation mutagenesis and computational analysis, mutants with improved kinetics and a shift in the pH activity profile for peroxidative substrates were found, while they retained their kinetic values for peroxygenative substrates. This striking change was accompanied by a 4.5°C enhancement in kinetic thermostability despite the variants carried up to four consecutive mutations. Taken together, our study proves that the origin of the peroxidative activity in UPOs, unlike other ligninolytic peroxidases described to date, is not dependent on a LRET route from oxidizable residues at the protein surface, but rather it seems to be exclusively located at the heme access channel.
Related documenthttps://www.frontiersin.org/articles/10.3389/fbioe.2021.741282/full#supplementary-material
CitationMolina Espeja, P. [et al.]. Mapping potential determinants of peroxidative activity in an evolved fungal peroxygenase from agrocybe aegerita. "Frontiers in Bioengineering and Biotechnology", 2021, vol. 14.
URIhttp://hdl.handle.net/2117/374512
DOI10.3389/fbioe.2021.741282
ISSN2296-4185
Publisher versionhttps://www.frontiersin.org/articles/10.3389/fbioe.2021.741282/full
Collections
Share: