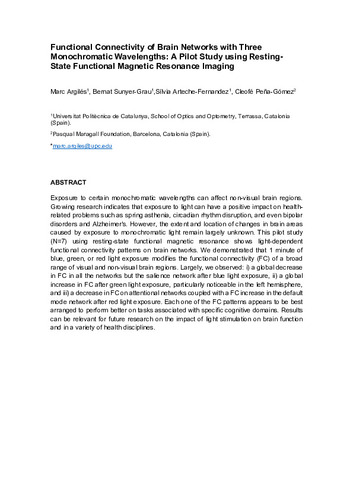 Except where otherwise noted, content on this work is licensed under a Creative Commons license : Attribution 4.0 International
Abstract
Exposure to certain monochromatic wavelengths can affect non-visual brain regions. Growing research indicates that exposure to light can have a positive impact on health-related problems such as spring asthenia, circadian rhythm disruption, and even bipolar disorders and Alzheimer’s. However, the extent and location of changes in brain areas caused by exposure to monochromatic light remain largely unknown. This pilot study (N = 7) using resting-state functional magnetic resonance shows light-dependent functional connectivity patterns on brain networks. We demonstrated that 1 min of blue, green, or red light exposure modifies the functional connectivity (FC) of a broad range of visual and non-visual brain regions. Largely, we observed: (i) a global decrease in FC in all the networks but the salience network after blue light exposure, (ii) a global increase in FC after green light exposure, particularly noticeable in the left hemisphere, and (iii) a decrease in FC on attentional networks coupled with a FC increase in the default mode network after red light exposure. Each one of the FC patterns appears to be best arranged to perform better on tasks associated with specific cognitive domains. Results can be relevant for future research on the impact of light stimulation on brain function and in a variety of health disciplines.
CitationArgiles, M. [et al.]. Functional connectivity of brain networks with three monochromatic wavelengths: a pilot study using resting-state functional magnetic resonance imaging. "Scientific reports", núm. 12, article 16197, p. 1-10.
URIhttp://hdl.handle.net/2117/373815
DOI10.1038/s41598-022-20668-9
ISSN2045-2322
Publisher versionhttps://www.nature.com/articles/s41598-022-20668-9
Collections
Share: