Evaluating the potential of ozone in creating functional groups on cellulose 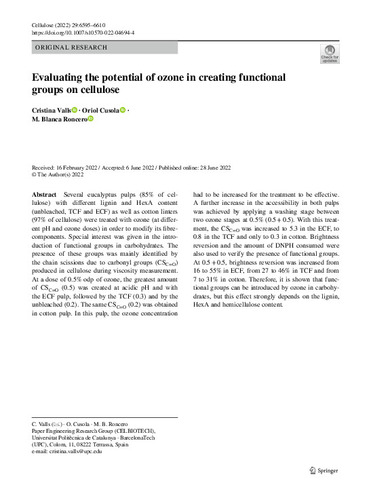 Except where otherwise noted, content on this work is licensed under a Creative Commons license : Attribution 4.0 International
ProjectTRANSFORMACION DE MATERIALES CELULOSICOS EN BIOPRODUCTOS AVANZADOS Y ECOLOGICOS (AEI-PID2020-114070RB-I00)
Abstract
Several eucalyptus pulps (85% of cellulose) with different lignin and HexA content (unbleached, TCF and ECF) as well as cotton linters (97% of cellulose) were treated with ozone (at different pH and ozone doses) in order to modify its fibre-components. Special interest was given in the introduction of functional groups in carbohydrates. The presence of these groups was mainly identified by the chain scissions due to carbonyl groups (CSC=O) produced in cellulose during viscosity measurement. At a dose of 0.5% odp of ozone, the greatest amount of CSC=O (0.5) was created at acidic pH and with the ECF pulp, followed by the TCF (0.3) and by the unbleached (0.2). The same CSC=O (0.2) was obtained in cotton pulp. In this pulp, the ozone concentration had to be increased for the treatment to be effective. A further increase in the accessibility in both pulps was achieved by applying a washing stage between two ozone stages at 0.5% (0.5¿+¿0.5). With this treatment, the CSC=O was increased to 5.3 in the ECF, to 0.8 in the TCF and only to 0.3 in cotton. Brightness reversion and the amount of DNPH consumed were also used to verify the presence of functional groups. At 0.5¿+¿0.5, brightness reversion was increased from 16 to 55% in ECF, from 27 to 46% in TCF and from 7 to 31% in cotton. Therefore, it is shown that functional groups can be introduced by ozone in carbohydrates, but this effect strongly depends on the lignin, HexA and hemicellulose content
CitationValls, C.; Cusola, O.; Roncero, M.B. Evaluating the potential of ozone in creating functional groups on cellulose. "Cellulose", 1 Agost 2022, vol. 29, núm. 12, p. 6595-6610.
URIhttp://hdl.handle.net/2117/373762
DOI10.1007/s10570-022-04694-4
ISSN1572-882X
Publisher versionhttps://link.springer.com/article/10.1007/s10570-022-04694-4
Collections
Share: