On the use of algebras as semantic domain of object societies 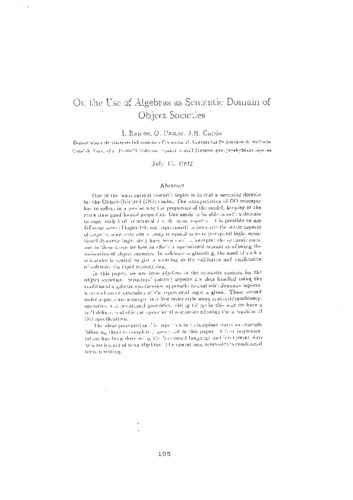 Except where otherwise noted, content on this work is licensed under a Creative Commons license : Attribution-NonCommercial-NoDerivs 4.0 International
Abstract
On the main current research topics is to find a semantic domain for the Object-Oriented (OO) model. The interpretation of OO concepts has to reflect in a precise way the properties of the model, keeping at the same time good formal properties. One needs to be able in such a domain to cope with both structural and dynamic aspects. It is possible to use different sorts of logics (clausal, equational) to interpret the static aspects of subjects: some extensions using temporal aspects (temporal logic, equational dynamic logic, etc.) have been used to interpret the dyanamics ones, but in theses cases we lose an efficient operational semantics alowing the animation of objects societies. In software engineering, the need of such a semantics is crucial to give a meaning and verification of software via rapid prototyping. In this paper, we use term algebras as the semantic domain for the object societies. Structural (static) aspects are thus handled using the traditional algebraic specification approach: to deal with dynamic aspects, a second-order extension of the equational logic is given. These second order aspects are managed in a list order style using syntactic machinery: operators and equational genericity. Doing things in this way we have a well defined and efficient operational semantics allowing the animation of OO-specifications. The ideas presented in this paper are in a incipient state: an example following them is completely presented in this paper. A first implementation has benn done using the functional language and interpreter Axis as a reification of term algebras. The operational semantics is conditional term rewriting.
CitationRamos, I.; Pastor, O.; Canós, J.H. On the use of algebras as semantic domain of object societies. A: "Proceedings of the 3rd International Workshop on the Deductive Approach to Information Systems and Databases". Universitat Politècnica de Catalunya. Departament de Llenguatges i Sistemes Informàtics, 1992, p. 105-126.
URIhttp://hdl.handle.net/2117/373498
Collections
Share: