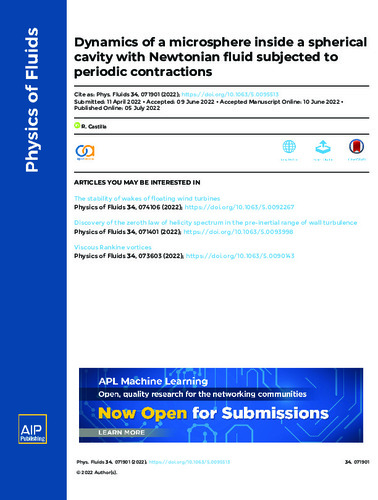 Castilla, R. Dynamics of a microsphere inside a spherical cavity with Newtonian fluid subjected to periodic contractions.pdf (4,442Mb)
Share:

Except where otherwise noted, content on this work is licensed under a Creative Commons license : Attribution 3.0 Spain
Abstract
Mechanical forces on the nucleus of a biological cell can play a significant role in its positioning within the cell. Some models for the migration of the nucleus are based on biochemical signals, which have a very slow response, and others on the mechanical actions of direct pushing–pulling forces, relying on the cytoskeleton and cell contractility. In the present work, hydrodynamic drag forces, produced by the surrounding membrane movement and acting on a spherical model of the nucleus, are numerically investigated. The space distributions of force and drag resistance are estimated by unsteady three-dimensional computational fluid dynamics simulations. These distributions are functions of sphere size and position, and they are fitted to mathematical models. Dynamic simulations are performed using these mathematical models to compute the trajectory of the microsphere under the action of thousands of position-dependent pushing–pulling forces. A characteristic time is estimated by linearization of the equation, and a dynamic simulation is performed with one-dimensional finite differences. With this approach, it takes a few minutes to simulate several hours of nuclear migration. It is shown that in the long term, nuclei tend to migrate to the center of the cell, especially when it is small compared with the cell size. The model presented here, based exclusively on hydrodynamic interaction in a Newtonian fluid, shows that pushing–pulling forces on the nucleus, produced by periodic contractions of the cell membrane, will cause it to migrate to the center of the cell in a manner that is in agreement with experimental observations
CitationCastilla, R. Dynamics of a microsphere inside a spherical cavity with Newtonian fluid subjected to periodic contractions. "Physics of fluids", 5 Juliol 2022, vol. 34, núm. 7, article 071901.
URIhttp://hdl.handle.net/2117/371598
DOI10.1063/5.0095513
ISSN1070-6631
Publisher versionhttps://aip.scitation.org/doi/full/10.1063/5.0095513
Collections
Share: