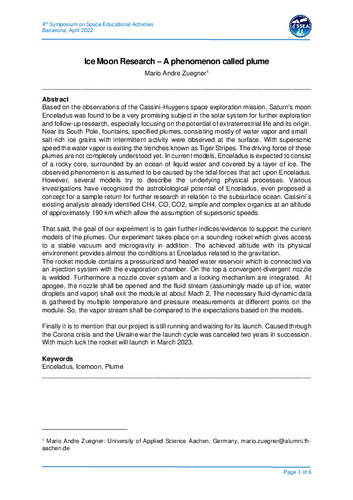 Except where otherwise noted, content on this work is licensed under a Creative Commons license : Attribution-NonCommercial-NoDerivs 4.0 International
Abstract
Based on the observations of the Cassini-Huygens space exploration mission, Saturn's moon Enceladus was found to be a very promising subject in the solar system for further exploration and follow-up research, especially focusing on the potential of extraterrestrial life and its origin. Near its South Pole, fountains, specified plumes, consisting mostly of water vapor and small salt-rich ice grains with intermittent activity were observed at the surface. With supersonic speed the water vapor is exiting the trenches known as Tiger Stripes. The driving force of these plumes are not completely understood yet. In current models, Enceladus is expected to consist of a rocky core, surrounded by an ocean of liquid water and covered by a layer of ice. The observed phenomenon is assumed to be caused by the tidal forces that act upon Enceladus. However, several models try to describe the underlying physical processes. Various investigations have recognized the astrobiological potential of Enceladus, even proposed a concept for a sample return for further research in relation to the subsurface ocean. Cassini ́s existing analysis already identified CH4, CO, CO2, simple and complex organics at an altitude of approximately 190 km which allow the assumption of supersonic speeds. That said, the goal of our experiment is to gain further indices/evidence to support the current models of the plumes. Our experiment takes place on a sounding rocket which gives access to a stable vacuum and microgravity in addition. The achieved altitude with its physical environment provides almost the conditions at Enceladus related to the gravitation. The rocket module contains a pressurized and heated water reservoir which is connected via an injection system with the evaporation chamber. On the top a convergent-divergent nozzle is welded. Furthermore a nozzle cover system and a locking mechanism are integrated. At apogee, the nozzle shall be opened and the fluid stream (assumingly made up of ice, water droplets and vapor) shall exit the module at about Mach 2. The necessary fluid-dynamic data is gathered by multiple temperature and pressure measurements at different points on the module. So, the vapor stream shall be compared to the expectations based on the models. Finally it is to mention that our project is still running and waiting for its launch. Caused through the Corona crisis and the Ukraine war the launch cycle was canceled two years in succession. With much luck the rocket will launch in March 2023.
CitationZuegner, M.A. Ice moon research – A phenomenon called plume. A: "4th Symposium on Space Educational Activities". Universitat Politècnica de Catalunya, 2022,
URIhttp://hdl.handle.net/2117/370827
DOI10.5821/conference-9788419184405.102
ISBN9788419184405
Collections
Share: