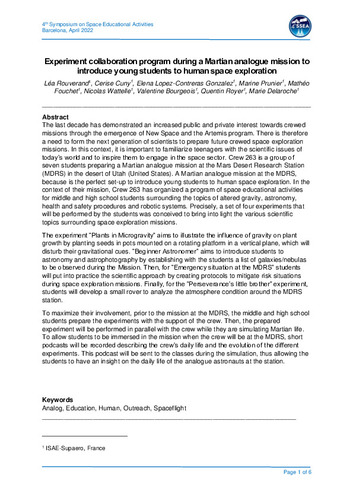 Except where otherwise noted, content on this work is licensed under a Creative Commons license : Attribution-NonCommercial-NoDerivs 4.0 International
Abstract
The last decade has demonstrated an increased public and private interest towards crewed missions through the emergence of New Space and the Artemis program. There is therefore a need to form the next generation of scientists to prepare future crewed space exploration missions. In this context, it is important to familiarize teenagers with the scientific issues of today’s world and to inspire them to engage in the space sector. Crew 263 is a group of seven students preparing a Martian analogue mission at the Mars Desert Research Station (MDRS) in the desert of Utah (United States). A Martian analogue mission at the MDRS, because is the perfect set-up to introduce young students to human space exploration. In the context of their mission, Crew 263 has organized a program of space educational activities for middle and high school students surrounding the topics of altered gravity, astronomy, health and safety procedures and robotic systems. Precisely, a set of four experiments that will be performed by the students was conceived to bring into light the various scientific topics surrounding space exploration missions. The experiment “Plants in Microgravity” aims to illustrate the influence of gravity on plant growth by planting seeds in pots mounted on a rotating platform in a vertical plane, which will disturb their gravitational cues. “Beginner Astronomer” aims to introduce students to astronomy and astrophotography by establishing with the students a list of galaxies/nebulas to be observed during the Mission. Then, for “Emergency situation at the MDRS” students will put into practice the scientific approach by creating protocols to mitigate risk situations during space exploration missions. Finally, for the “Perseverance’s little brother” experiment, students will develop a small rover to analyze the atmosphere condition around the MDRS station. To maximize their involvement, prior to the mission at the MDRS, the middle and high school students prepare the experiments with the support of the crew. Then, the prepared experiment will be performed in parallel with the crew while they are simulating Martian life. To allow students to be immersed in the mission when the crew will be at the MDRS, short podcasts will be recorded describing the crew’s daily life and the evolution of the different experiments. This podcast will be sent to the classes during the simulation, thus allowing the students to have an insight on the daily life of the analogue astronauts at the station.
CitationRouverand, L. [et al.]. Experiment collaboration program during a Martian analogue mission to introduce young students to human space exploration. A: "4th Symposium on Space Educational Activities". Universitat Politècnica de Catalunya, 2022,
URIhttp://hdl.handle.net/2117/370619
DOI10.5821/conference-9788419184405.090
ISBN9788419184405
Collections
Share: