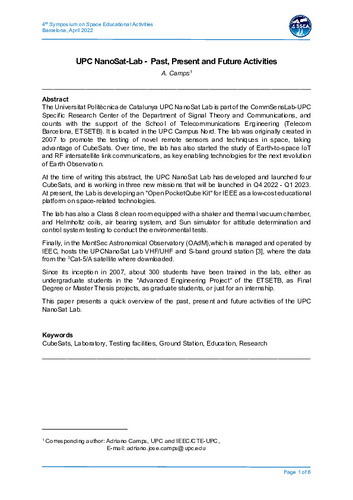 Except where otherwise noted, content on this work is licensed under a Creative Commons license : Attribution-NonCommercial-NoDerivs 4.0 International
Abstract
The Universitat Politècnica de Catalunya UPC NanoSat Lab is part of the CommSensLab-UPC Specific Research Center of the Department of Signal Theory and Communications, and counts with the support of the School of Telecommunications Engineering (Telecom Barcelona, ETSETB). It is located in the UPC Campus Nord. The lab was originally created in 2007 to promote the testing of novel remote sensors and techniques in space, taking advantage of CubeSats. Over time, the lab has also started the study of Earth-to-space IoT and RF intersatellite link communications, as key enabling technologies for the next revolution of Earth Observation. At the time of writing this abstract, the UPC NanoSat Lab has developed and launched four CubeSats, and is working in three new missions that will be launched in Q4 2022 - Q1 2023. At present, the Lab is developing an "Open PocketQube Kit" for IEEE as a low-cost educational platform on space-related technologies. The lab has also a Class 8 clean room equipped with a shaker and thermal vacuum chamber, and Helmholtz coils, air bearing system, and Sun simulator for attitude determination and control system testing to conduct the environmental tests. Finally, in the MontSec Astronomical Observatory (OAdM),which is managed and operated by IEEC, hosts the UPCNanoSat Lab VHF/UHF and S-band ground station [3], where the data from the 3Cat-5/A satellite where downloaded. Since its inception in 2007, about 300 students have been trained in the lab, either as undergraduate students in the "Advanced Engineering Project" of the ETSETB, as Final Degree or Master Thesis projects, as graduate students, or just for an internship. This paper presents a quick overview of the past, present and future activities of the UPC NanoSat Lab
CitationCamps Carmona, A.J. UPC NanoSat-Lab - Past, present and future activities. A: "4th Symposium on Space Educational Activities". Universitat Politècnica de Catalunya, 2022,
URIhttp://hdl.handle.net/2117/370566
DOI10.5821/conference-9788419184405.055
ISBN9788419184405
Collections
Share: