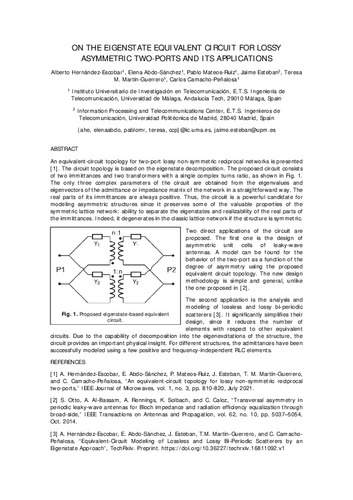 Except where otherwise noted, content on this work is licensed under a Creative Commons license : Attribution-NonCommercial-NoDerivs 4.0 International
Abstract
An equivalent-circuit topology for two-port lossy non-symmetric reciprocal networks is presented [1]. The circuit topology is based on the eigenstate decomposition. The proposed circuit consists of two immittances and two transformers with a single complex turns ratio, as shown in Fig. 1. The only three complex parameters of the circuit are obtained from the eigenvalues and eigenvectors of the admittance or impedance matrix of the network in a straightforward way. The real parts of its immittances are always positive. Thus, the circuit is a powerful candidate for modeling asymmetric structures since it preserves some of the valuable properties of the symmetric lattice network: ability to separate the eigenstates and realizability of the real parts of the immittances. Indeed, it degenerates in the classic lattice network if the structure is symmetric. Two direct applications of the circuit are proposed. The first one is the design of asymmetric unit cells of leaky-wave antennas. A model can be found for the behavior of the two-port as a function of the degree of asymmetry using the proposed equivalent circuit topology. The new design methodology is simple and general, unlike the one proposed in [2]. The second application is the analysis and modeling of lossless and lossy bi-periodic scatterers [3]. It significantly simplifies their design, since it reduces the number of elements with respect to other equivalent circuits. Due to the capability of decomposition into the eigenexcitations of the structure, the circuit provides an important physical insight. For different structures, the admittances have been successfully modeled using a few positive and frequency-independent RLC elements.
CitationHernández-Escobar, A. [et al.]. On the eigenstate equivalent circuit for lossy asymmetric two-ports and its applications. A: EIEC 2022. "XIV Iberian Meeting on Computational Electromagnetics". Universitat Politècnica de Catalunya. Remote Sensing, Antennas, Microwaves and Superconductivity Group (CommSensLab), 2022,
URIhttp://hdl.handle.net/2117/369835
Collections
Share: