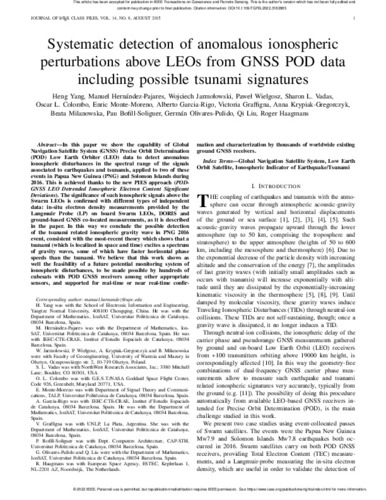 Liu, Qi
Haagmans, Roger
Document typeArticle
PublisherInstitute of Electrical and Electronics Engineers (IEEE)
Rights accessOpen Access
All rights reserved. This work is protected by the corresponding intellectual and industrial property rights. Without prejudice to any existing legal exemptions, reproduction, distribution, public communication or transformation of this work are prohibited without permission of the copyright holder
ProjectPITHIA-NRF - Plasmasphere Ionosphere Thermosphere Integrated Research Environment and Access services: a Network of Research Facilities (EC-H2020-101007599)
Abstract
In this article, we show the capability of a global navigation satellite system (GNSS) precise orbit determination (POD) low Earth orbit (LEO) data to detect anomalous ionospheric disturbances in the spectral range of the signals associated with earthquakes and tsunamis, applied to two of these events in Papua New Guinea (PNG) and the Solomon Islands during 2016. This is achieved thanks to the new PIES approach (POD-GNSS LEO Detrended Ionospheric Electron Content Significant Deviations). The significance of such ionospheric signals above the swarm LEOs is confirmed with different types of independent data: in situ electron density measurements provided by the Langmuir Probe (LP) onboard swarm LEOs, DORIS, and ground-based GNSS colocated measurements, as it is described in this article. In this way, we conclude the possible detection of the tsunami-related ionospheric gravity wave in PNG 2016 event, consistent with the most-recent theory, which shows that a tsunami (which is localized in space and time) excites a spectrum of gravity waves, some of which have faster horizontal phase speeds than the tsunami. We believe that this work shows as well the feasibility of a future potential monitoring system of ionospheric disturbances, to be made possible by hundreds of CubeSats with POD GNSS receivers among other appropriate sensors, and supported for real-time or near real-time confirmation and characterization by thousands of worldwide existing ground GNSS receivers.
Description
© 2022 IEEE. Personal use of this material is permitted. Permission from IEEE must be obtained for all other uses, in any current or future media, including reprinting/republishing this material for advertising or promotional purposes,creating new collective works, for resale or redistribution to servers or lists, or reuse of any copyrighted component of this work in other works.
CitationYang, H. [et al.]. Systematic detection of anomalous ionospheric perturbations above LEOs from GNSS POD Data including possible tsunami signatures. "IEEE transactions on geoscience and remote sensing", 13 Juny 2022, vol. 60, núm. 5803423.
URIhttp://hdl.handle.net/2117/369717
DOI10.1109/TGRS.2022.3182885
ISSN0196-2892
Publisher versionhttps://ieeexplore.ieee.org/document/9795155
Collections
Share: