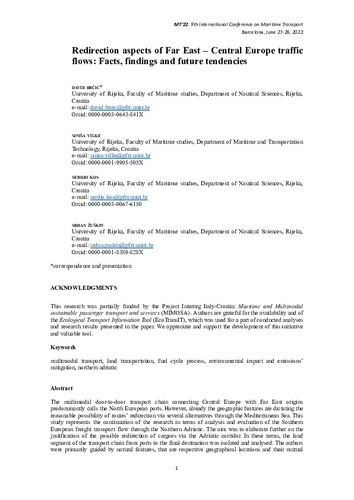 Except where otherwise noted, content on this work is licensed under a Creative Commons license : Attribution-NonCommercial-NoDerivs 3.0 Spain
Abstract
The multimodal door-to-door transport chain connecting Central Europe with Far East origins predominantly calls the North European ports. However, already the geographic features are dictating the reasonable possibility of routes’ redirection via several alternatives through the Mediterranean Sea. This study represents the continuation of the research in terms of analysis and evaluation of the Southern European freight transport flow through the Northern Adriatic. The aim was to elaborate further on the justification of the possible redirection of cargoes via the Adriatic corridor. In these terms, the land segment of the transport chain from ports to the final destination was isolated and analysed. The authors were primarily guided by natural features, that are respective geographical locations and their mutual distances. For this purpose, container transport on two traffic flows was simulated, with emphasis on the land segment between the second (destination) port and the final destination. Considering the usual freight lines, the door-to-door container transport between origin and destination was selected. Both road and rail transportation modes were investigated. Besides general parameters, such as distances, time, and fuel consumption, the environmental impact for all scenarios was determined for both downstream and final fuel cycle processes. In these terms, basic environmental parameters for four possible scenarios were calculated: energy consumption, emissions of carbon dioxide, greenhouse gases, nitrogen oxides, sulphur dioxide, non-methane hydrocarbons, and particulate matter. Results are indicating that, together with a significant reduction of sea transportation impacts on the environment, the eventual redirection contributes to emissions’ mitigation and the sustainability of transportation. These results are accompanied by several initiatives in the area.  Apart from potential benefits, the findings were discussed from the reliability point of view, i.e. the ability of Northern Adriatic ports and the land infrastructure to successfully take over this task, at least to a certain extent, and finally, in a reasonable future.
CitationBrčić, David [et al.]. Redirection aspects of Far East – Central Europe traffic flows: Facts, findings and future tendencies . A: "Maritime Transport Conference", 2022, núm. 9
URIhttp://hdl.handle.net/2117/369112
DOI10.5821/mt.11003
Collections
Share: