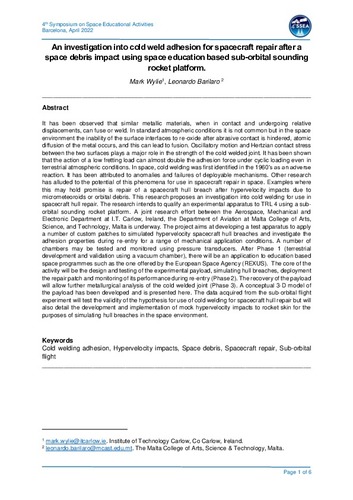 Except where otherwise noted, content on this work is licensed under a Creative Commons license : Attribution-NonCommercial-NoDerivs 4.0 International
Abstract
It has been observed that similar metallic materials, when in contact and undergoing relative displacements, can fuse or weld. In standard atmospheric conditions it is not common but in the space environment the inability of the surface interfaces to re-oxide after abrasive contact is hindered, atomic diffusion of the metal occurs, and this can lead to fusion. Oscillatory motion and Hertzian contact stress between the two surfaces plays a major role in the strength of the cold welded joint. It has been shown that the action of a low fretting load can almost double the adhesion force under cyclic loading even in terrestrial atmospheric conditions. In space, cold welding was first identified in the 1960’s as an adverse reaction. It has been attributed to anomalies and failures of deployable mechanisms. Other research has alluded to the potential of this phenomena for use in spacecraft repair in space. Examples where this may hold promise is repair of a spacecraft hull breach after hypervelocity impacts due to micrometeoroids or orbital debris. This research proposes an investigation into cold welding for use in spacecraft hull repair. The research intends to qualify an experimental apparatus to TRL 4 using a sub-orbital sounding rocket platform. A joint research effort between the Aerospace, Mechanical and Electronic Department at I.T. Carlow, Ireland, the Department of Aviation at Malta College of Arts, Science, and Technology, Malta is underway. The project aims at developing a test apparatus to apply a number of custom patches to simulated hypervelocity spacecraft hull breaches and investigate the adhesion properties during re-entry for a range of mechanical application conditions. A number of chambers may be tested and monitored using pressure transducers. After Phase 1 (terrestrial development and validation using a vacuum chamber), there will be an application to education based space programmes such as the one offered by the European Space Agency (REXUS). The core of the activity will be the design and testing of the experimental payload, simulating hull breaches, deployment the repair patch and monitoring of its performance during re-entry (Phase 2). The recovery of the payload will allow further metallurgical analysis of the cold welded joint (Phase 3). A conceptual 3-D model of the payload has been developed and is presented here. The data acquired from the sub-orbital flight experiment will test the validity of the hypothesis for use of cold welding for spacecraft hull repair but will also detail the development and implementation of mock hypervelocity impacts to rocket skin for the purposes of simulating hull breaches in the space environment
CitationWylie, M.; Barilaro, L. An investigation into cold weld adhesion for spacecraft repair after a space debris impact using space education based sub-orbital sounding rocket platform. A: "4th Symposium on Space Educational Activities". Universitat Politècnica de Catalunya, 2022,
URIhttp://hdl.handle.net/2117/368694
DOI10.5821/conference-9788419184405.016
ISBN9788419184405
Collections
Share: