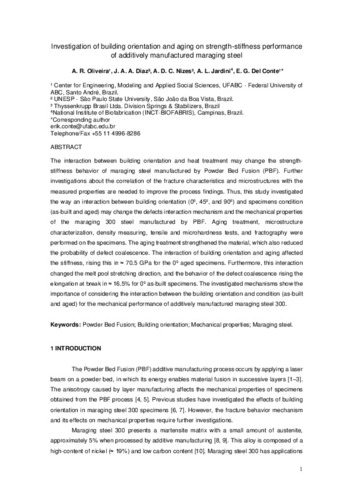 Except where otherwise noted, content on this work is licensed under a Creative Commons license : Attribution-NonCommercial-NoDerivs 4.0 International
Abstract
The interaction between building orientation and heat treatment may change the strength–stiffness behavior of maraging steel manufactured by powder bed fusion (PBF). Further investigations about the correlation of the fracture characteristics and microstructures with the measured properties are needed to improve the process findings. Thus, this study investigated the way an interaction between building orientation (0°, 45°, and 90°) and specimen condition (as-built and aged) may change the defects interaction mechanism and the mechanical properties of the maraging 300 steel manufactured by PBF. Aging treatment, microstructure characterization, density measuring, tensile and microhardness tests, and fractography were performed on the specimens. The aging treatment strengthened the material, which also reduced the probability of defect coalescence. The interaction of building orientation and aging affected the stiffness, rising this in¿˜¿70.5 GPa for the 0° aged specimens. Furthermore, this interaction changed the melt pool stretching direction, and the behavior of the defect coalescence rises the elongation at break in¿˜¿16.5% for 0° as-built specimens. The investigated mechanisms show the importance of considering the interaction between the building orientation and condition (as-built and aged) for the mechanical performance of additively manufactured maraging steel 300.
CitationOliveira, A. [et al.]. Investigation of building orientation and aging on strength–stiffness performance of additively manufactured maraging steel. "Journal of materials engineering and performance", Febrer 2021, vol. 30, núm. 2, p. 1479-1489.
URIhttp://hdl.handle.net/2117/368457
DOI10.1007/s11665-020-05414-4
ISSN1059-9495
Publisher versionhttps://link.springer.com/article/10.1007/s11665-020-05414-4
Collections
Share: