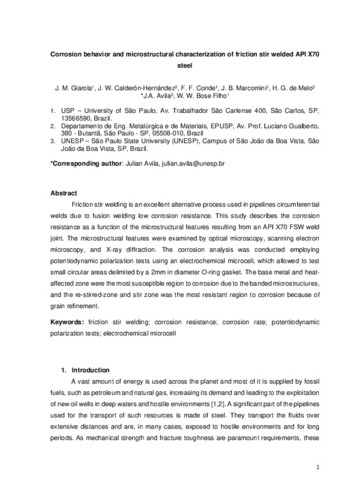 Except where otherwise noted, content on this work is licensed under a Creative Commons license : Attribution-NonCommercial-NoDerivs 4.0 International
Abstract
Friction stir welding (FSW) is an excellent alternative process used in pipelines circumferential welds due to fusion welded joint low corrosion resistance. This study describes the corrosion resistance as a function of the microstructural features resulting from an API X70 FSW welded joint. The microstructural features were examined by optical microscopy, scanning electron microscopy, and x-ray diffraction. The corrosion analysis was conducted employing potentiodynamic polarization tests using an electrochemical microcell, which allowed to test small circular areas delimited by a 2 mm in diameter O-ring gasket. The base metal and heat-affected zone were the most susceptible regions to corrosion due to their banded microstructures. The re-stirred-zone and stir zone were the most resistant regions to corrosion which was associated to grain refinement. The corrosion rate presented by the base metal and the heat-affected zone was approximately six times higher than the region of least susceptibility to corrosion, in this case, the re-stirred-zone.
CitationGiarola, J. [et al.]. Corrosion behavior and microstructural characterization of friction stir welded API X70 steel. "Journal of materials engineering and performance", Agost 2021, vol. 30, núm. 8, p. 5953-5961.
URIhttp://hdl.handle.net/2117/368414
DOI10.1007/s11665-021-05640-4
ISSN1059-9495
Publisher versionhttps://link.springer.com/article/10.1007/s11665-021-05640-4
Collections
Share: