Advances in power quality analysis techniques for electrical machines and drives: a review 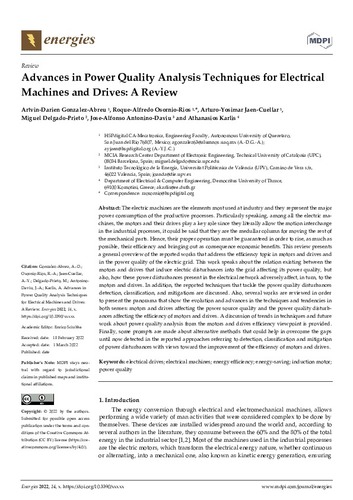 Except where otherwise noted, content on this work is licensed under a Creative Commons license : Attribution 4.0 International
Abstract
The electric machines are the elements most used at an industry level, and they represent the major power consumption of the productive processes. Particularly speaking, among all electric machines, the motors and their drives play a key role since they literally allow the motion interchange in the industrial processes; it could be said that they are the medullar column for moving the rest of the mechanical parts. Hence, their proper operation must be guaranteed in order to raise, as much as possible, their efficiency, and, as consequence, bring out the economic benefits. This review presents a general overview of the reported works that address the efficiency topic in motors and drives and in the power quality of the electric grid. This study speaks about the relationship existing between the motors and drives that induces electric disturbances into the grid, affecting its power quality, and also how these power disturbances present in the electrical network adversely affect, in turn, the motors and drives. In addition, the reported techniques that tackle the detection, classification, and mitigations of power quality disturbances are discussed. Additionally, several works are reviewed in order to present the panorama that show the evolution and advances in the techniques and tendencies in both senses: motors and drives affecting the power source quality and the power quality disturbances affecting the efficiency of motors and drives. A discussion of trends in techniques and future work about power quality analysis from the motors and drives efficiency viewpoint is provided. Finally, some prompts are made about alternative methods that could help in overcome the gaps until now detected in the reported approaches referring to the detection, classification and mitigation of power disturbances with views toward the improvement of the efficiency of motors and drives.
CitationGonzález, A.D. [et al.]. Advances in power quality analysis techniques for electrical machines and drives: a review. "Energies", 1 Març 2022, vol. 15, núm. 5, article 1909, p. 1-26.
URIhttp://hdl.handle.net/2117/367995
DOI10.3390/en15051909
ISSN1996-1073
Publisher versionhttps://www.mdpi.com/1996-1073/15/5/1909
Collections
Share: