Coupled radiation and natural convection: Different approaches of the slw model for a non-gray gas mixture 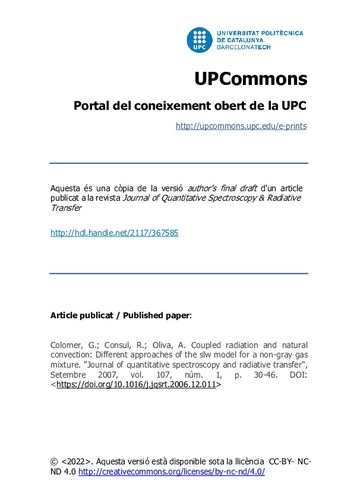 Except where otherwise noted, content on this work is licensed under a Creative Commons license : Attribution-NonCommercial-NoDerivs 3.0 Spain
Abstract
The coupling between non-gray radiation heat transfer and convection–conduction heat transfer is studied. The spectral line weighted sum of gray gases model (SLW) is used to account for non-gray radiation properties. The aim of this work is to analyze the influence of the different approaches used when calculating the parameters of the SLW model. Such strategies include the use of optimized model coefficients to reduce the number of operations, and the interpolation of the distribution function instead of the use of mathematical correlations. Non-gray calculations are also compared to gray solutions using the Planck mean absorption coefficient, which can be also calculated with the SLW model. The radiative transfer equation (RTE) is solved by means of the discrete ordinates method (DOM). A natural convection driven cavity is chosen to couple radiation and conduction–convection energy transfer. Several cases, with a significant variation of the ratio between radiation to convection heat transfer, as well as the ratio between radiation to conduction heat transfer, are discussed.
CitationColomer, G.; Consul, R.; Oliva, A. Coupled radiation and natural convection: Different approaches of the slw model for a non-gray gas mixture. "Journal of quantitative spectroscopy and radiative transfer", Setembre 2007, vol. 107, núm. 1, p. 30-46.
URIhttp://hdl.handle.net/2117/367585
DOI10.1016/j.jqsrt.2006.12.011
ISSN0022-4073
Publisher versionhttps://www.sciencedirect.com/science/article/abs/pii/S0022407307000064
Collections
Share: