Rockfalls: analysis of the block fragmentation through field experiments 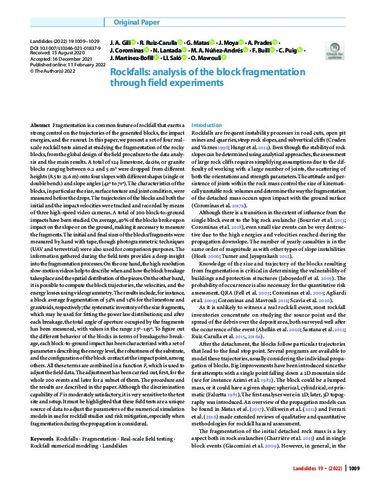 Except where otherwise noted, content on this work is licensed under a Creative Commons license : Attribution 3.0 Spain
ProjectDESPRENDIMIENTOS EN ESCARPES ROCOSOS: CUANTIFICACION DEL RIESGO Y SU PREVENCION (MINECO-BIA2013-42582-P)
AVANCES EN EL ANALISIS DE LA CUANTIFICACION DEL RIESGO (QRA) POR DESPRENDIMIENTOS ROCOSOS EMPLEANDO AVANCES EN LAS TECNICAS GEOMATICAS (AEI-PID2019-103974RB-I00)
Abstract
Fragmentation is a common feature of rockfall that exerts a strong control on the trajectories of the generated blocks, the impact energies, and the runout. In this paper, we present a set of four real-scale rockfall tests aimed at studying the fragmentation of the rocky blocks, from the global design of the field procedure to the data analysis and the main results. A total of 124 limestone, dacite, or granite blocks ranging between 0.2 and 5 m3 were dropped from different heights (8.5 to 23.6 m) onto four slopes with different shapes (single or double bench) and slope angles (42º to 71º). The characteristics of the blocks, in particular the size, surface texture and joint condition, were measured before the drops. The trajectories of the blocks and both the initial and the impact velocities were tracked and recorded by means of three high-speed video cameras. A total of 200 block-to-ground impacts have been studied. On average, 40% of the blocks broke upon impact on the slope or on the ground, making it necessary to measure the fragments. The initial and final sizes of the blocks/fragments were measured by hand with tape, though photogrammetric techniques (UAV and terrestrial) were also used for comparison purposes. The information gathered during the field tests provides a deep insight into the fragmentation processes. On the one hand, the high-resolution slow-motion videos help to describe when and how the block breakage takes place and the spatial distribution of the pieces. On the other hand, it is possible to compute the block trajectories, the velocities, and the energy losses using videogrammetry. The results include, for instance, a block average fragmentation of 54% and 14% for the limestone and granitoids, respectively; the systematic inventory of the size fragments, which may be used for fitting the power law distributions; and after each breakage, the total angle of aperture occupied by the fragments has been measured, with values in the range 25º–145º. To figure out the different behavior of the blocks in terms of breakage/no breakage, each block-to-ground impact has been characterized with a set of parameters describing the energy level, the robustness of the substrate, and the configuration of the block contact at the impact point, among others. All these terms are combined in a function F, which is used to adjust the field data. The adjustment has been carried out, first, for the whole 200 events and later for a subset of them. The procedure and the results are described in the paper. Although the discrimination capability of F is moderately satisfactory, it is very sensitive to the test site and setup. It must be highlighted that these field tests are a unique source of data to adjust the parameters of the numerical simulation models in use for rockfall studies and risk mitigation, especially when fragmentation during the propagation is considered.
CitationGili, J. [et al.]. Rockfalls: analysis of the block fragmentation through field experiments. "Landslides", Maig 2022, vol. 19, núm. 5, p. 1009-1029.
URIhttp://hdl.handle.net/2117/367407
DOI10.1007/s10346-021-01837-9
ISSN1612-5118
Publisher versionhttps://link.springer.com/article/10.1007/s10346-021-01837-9
Collections
Share: