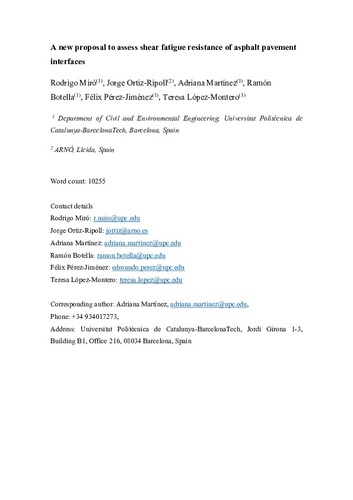 Document typeArticle
Rights accessOpen Access
Abstract
The degree of adherence between two bituminous layers can be assessed from shear tests carried out at constant displacement speed, which allow the shear strength and stiffness of the interface to be obtained, being usual to specify a minimum strength. But stronger bonds will be more stressed, which could negatively affect their fatigue behaviour. In this work, the shear fatigue behaviour of two interfaces of different stiffness has been analysed, based on a cyclic compression test, performed at controlled stress, using the test device B described in the NLT-382 standard, included in the draft of the European pre-norm prEN 12697-48. From these tests, fatigue laws for each type of interface have been obtained. These laws, combined with a calculation method developed by the authors, have made it possible to obtain the number of cycles that each interface would withstand, under certain load hypotheses.
Description
This is an Accepted Manuscript of an article published by Taylor & Francis Group in Road Materials and Pavement Design on 2021, available online at: http://www.tandfonline.com/10.1080/14680629.2021.1899966.
CitationMiro, R. [et al.]. A new proposal to assess shear fatigue resistance of asphalt pavement interfaces. "Road materials and pavement design", Maig 2021, vol. 22, núm. Sup 1, p. S462-S481.
URIhttp://hdl.handle.net/2117/367373
DOI10.1080/14680629.2021.1899966
ISSN2164-7402
Publisher versionhttps://www.tandfonline.com/doi/abs/10.1080/14680629.2021.1899966
Collections
Share: