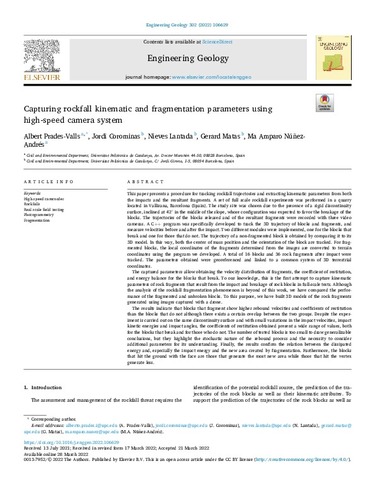 Document typeArticle
Rights accessOpen Access
Abstract
This paper presents a procedure for tracking rockfall trajectories and extracting kinematic parameters from both the impacts and the resultant fragments. A set of full scale rockfall experiments was performed in a quarry located in Vallirana, Barcelona (Spain). The study site was chosen due to the presence of a rigid discontinuity surface, inclined at 42° in the middle of the slope, whose configuration was expected to favor the breakage of the blocks. The trajectories of the blocks released and of the resultant fragments were recorded with three video cameras. A C++ program was specifically developed to track the 3D trajectory of blocks and fragments, and measure velocities before and after the impact. Two different modules were implemented, one for the blocks that break and one for those that do not. The trajectory of a non-fragmented block is obtained by comparing it to its 3D model. In this way, both the center of mass position and the orientation of the block are tracked. For fragmented blocks, the local coordinates of the fragments determined from the images are converted to terrain coordinates using the program we developed. A total of 16 blocks and 36 rock fragments after impact were tracked. The parameters obtained were georeferenced and linked to a common system of 3D terrestrial coordinates. The captured parameters allow obtaining the velocity distribution of fragments, the coefficient of restitution, and energy balance for the blocks that break. To our knowledge, this is the first attempt to capture kinematic parameters of rock fragments that result from the impact and breakage of rock blocks in full-scale tests. Although the analysis of the rockfall fragmentation phenomenon is beyond of this work, we have compared the performance of the fragmented and unbroken blocks. To this purpose, we have built 3D models of the rock fragments generated using images captured with a drone. The results indicate that blocks that fragment show higher rebound velocities and coefficients of restitution than the blocks that do not although there exists a certain overlap between the two groups. Despite the experiment is carried out on the same discontinuity surface and with small variations in the impact velocities, impact kinetic energies and impact angles, the coefficients of restitution obtained present a wide range of values, both for the blocks that break and for those who do not. The number of tested blocks is too small to draw generalizable conclusions, but they highlight the stochastic nature of the rebound process and the necessity to consider additional parameters for its understanding. Finally, the results confirm the relation between the dissipated energy and, especially the impact energy and the new area created by fragmentation. Furthermore, the blocks that hit the ground with the face are those that generate the most new area while those that hit the vertex generate less.
Location
1: Carrer Major, 486, 08759 Vallirana, Barcelona, Espanya
CitationPrades, A. [et al.]. Capturing rockfall kinematic and fragmentation parameters using high-speed camera system. "Engineering geology", 5 Juny 2022, vol. 302, núm. June, p. 106629/1--17.
URIhttp://hdl.handle.net/2117/367251
DOI10.1016/j.enggeo.2022.106629
ISSN0013-7952
Publisher versionhttps://www.sciencedirect.com/science/article/pii/S0013795222001144
Collections
Share: