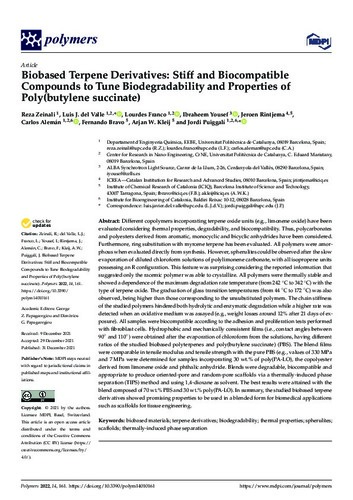 Bravo López, Fernando
Kleij, Arjan W.
Puiggalí Allepuz, Jordi
Document typeArticle
PublisherMultidisciplinary Digital Publishing Institute (MDPI)
Rights accessOpen Access
Abstract
Different copolymers incorporating terpene oxide units (e.g., limonene oxide) have been evaluated considering thermal properties, degradability, and biocompatibility. Thus, polycarbonates and polyesters derived from aromatic, monocyclic and bicyclic anhydrides have been considered. Furthermore, ring substitution with myrcene terpene has been evaluated. All polymers were amorphous when evaluated directly from synthesis. However, spherulites could be observed after the slow evaporation of diluted chloroform solutions of polylimonene carbonate, with all isopropene units possessing an R configuration. This feature was surprising considering the reported information that suggested only the racemic polymer was able to crystallize. All polymers were thermally stable and showed a dependence of the maximum degradation rate temperature (from 242 °C to 342 °C) with the type of terpene oxide. The graduation of glass transition temperatures (from 44 °C to 172 °C) was also observed, being higher than those corresponding to the unsubstituted polymers. The chain stiffness of the studied polymers hindered both hydrolytic and enzymatic degradation while a higher rate was detected when an oxidative medium was assayed (e.g., weight losses around 12% after 21 days of exposure). All samples were biocompatible according to the adhesion and proliferation tests performed with fibroblast cells. Hydrophobic and mechanically consistent films (i.e., contact angles between 90° and 110°) were obtained after the evaporation of chloroform from the solutions, having different ratios of the studied biobased polyterpenes and poly(butylene succinate) (PBS). The blend films were comparable in tensile modulus and tensile strength with the pure PBS (e.g., values of 330 MPa and 7 MPa were determined for samples incorporating 30 wt.% of poly(PA-LO), the copolyester derived from limonene oxide and phthalic anhydride. Blends were degradable, biocompatible and appropriate to produce oriented-pore and random-pore scaffolds via a thermally-induced phase separation (TIPS) method and using 1,4-dioxane as solvent. The best results were attained with the blend composed of 70 wt.% PBS and 30 wt.% poly(PA-LO). In summary, the studied biobased terpene derivatives showed promising properties to be used in a blended form for biomedical applications such as scaffolds for tissue engineering.
CitationZeinali, R. [et al.]. Biobased terpene derivatives: stiff and biocompatible compounds to tune biodegradability and properties of poly(butylene succinate). "Polymers", 1 Gener 2022, vol. 14, núm. 1, p. 161:1-161:25.
URIhttp://hdl.handle.net/2117/367082
DOI10.3390/polym14010161
ISSN2073-4360
Publisher versionhttps://www.mdpi.com/2073-4360/14/1/161
Collections
Share: