Numerical modelling of opposing subduction in the Western Mediterranean 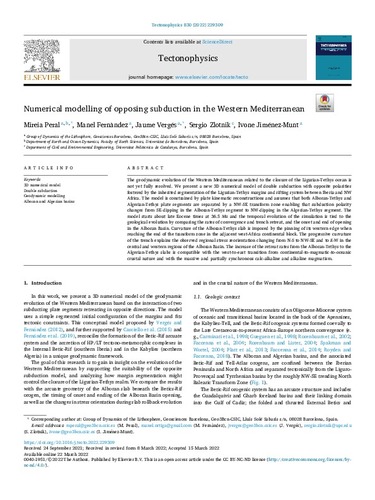 Except where otherwise noted, content on this work is licensed under a Creative Commons license : Attribution-NonCommercial-NoDerivs 4.0 International
ProjectINGENIERIA COMPUTACIONAL BASADA EN SIMULACION DE APRENDIZAJE AUTOMATICO (AEI-PID2020-113463RB-C32)
MATHROCKS - Multiscale Inversion of Porous Rock Physics using High-Performance Simulators: Bridging the Gap between Mathematics and Geophysics (EC-H2020-777778)
Abstract
The geodynamic evolution of the Western Mediterranean related to the closure of the Ligurian-Tethys ocean is not yet fully resolved. We present a new 3D numerical model of double subduction with opposite polarities fostered by the inherited segmentation of the Ligurian-Tethys margins and rifting system between Iberia and NW Africa. The model is constrained by plate kinematic reconstructions and assumes that both Alboran-Tethys and Algerian-Tethys plate segments are separated by a NW-SE transform zone enabling that subduction polarity changes from SE-dipping in the Alboran-Tethys segment to NW-dipping in the Algerian-Tethys segment. The model starts about late Eocene times at 36.5 Ma and the temporal evolution of the simulation is tied to the geological evolution by comparing the rates of convergence and trench retreat, and the onset and end of opening in the Alboran Basin. Curvature of the Alboran-Tethys slab is imposed by the pinning of its western edge when reaching the end of the transform zone in the adjacent west-Africa continental block. The progressive curvature of the trench explains the observed regional stress reorientation changing from N-S to NW-SE and to E-W in the central and western regions of the Alboran Basin. The increase of the retreat rates from the Alboran-Tethys to the Algerian-Tethys slabs is compatible with the west-to-east transition from continental-to-magmatic-to-oceanic crustal nature and with the massive and partially synchronous calc-alkaline and alkaline magmatism.
Description
© 2022 Elsevier. This manuscript version is made available under the CC-BY-NC-ND 4.0 license http://creativecommons.org/licenses/by-nc-nd/4.0/
CitationPeral, M. [et al.]. Numerical modelling of opposing subduction in the Western Mediterranean. "Tectonophysics", 5 Maig 2022, vol. 830, p. 229309:1-229309:15.
URIhttp://hdl.handle.net/2117/366850
DOI10.1016/j.tecto.2022.229309
ISSN0040-1951
Publisher versionhttps://www.sciencedirect.com/science/article/pii/S0040195122001032
Collections
Share: