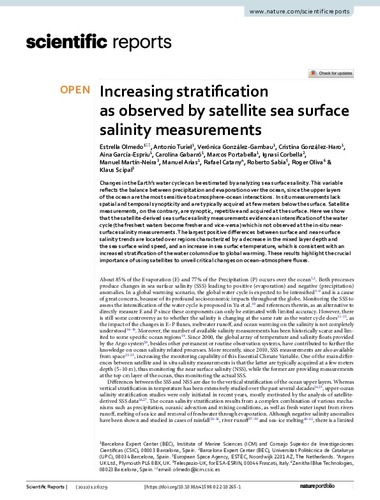 Except where otherwise noted, content on this work is licensed under a Creative Commons license : Attribution 3.0 Spain
ProjectENFOQUES SINERGICOS PARA UNA NUEVA GENERACION DE PRODUCTOS Y APLICACIONES DE OBSERVACION DE LA TIERRA. PARTE CSIC (AEI-PID2020-114623RB-C31)
Abstract
Changes in the Earth’s water cycle can be estimated by analyzing sea surface salinity. This variable refects the balance between precipitation and evaporation over the ocean, since the upper layers of the ocean are the most sensitive to atmosphere–ocean interactions. In situ measurements lack spatial and temporal synopticity and are typically acquired at few meters below the surface. Satellite measurements, on the contrary, are synoptic, repetitive and acquired at the surface. Here we show that the satellite-derived sea surface salinity measurements evidence an intensifcation of the water cycle (the freshest waters become fresher and vice-versa) which is not observed at the in-situ nearsurface salinity measurements. The largest positive diferences between surface and near-surface salinity trends are located over regions characterized by a decrease in the mixed layer depth and the sea surface wind speed, and an increase in sea surface temperature, which is consistent with an increased stratifcation of the water column due to global warming. These results highlight the crucial importance of using satellites to unveil critical changes on ocean–atmosphere fuxes.
CitationOlmedo, E. [et al.]. Increasing stratification as observed by satellite sea surface salinity measurements. "Scientific reports", 1 Desembre 2022, vol. 12, núm. 6279, p. 6279:1-6279:9.
URIhttp://hdl.handle.net/2117/366829
DOI10.1038/s41598-022-10265-1
ISSN2045-2322
Publisher versionhttps://www.nature.com/articles/s41598-022-10265-1
Collections
Share: