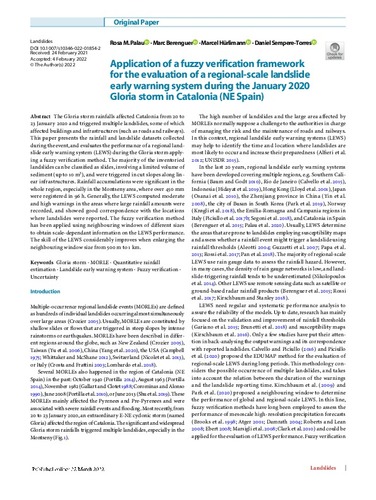 Except where otherwise noted, content on this work is licensed under a Creative Commons license : Attribution 3.0 Spain
ProjectANYWHERE - EnhANcing emergencY management and response to extreme WeatHER and climate Events (EC-H2020-700099)
Abstract
The Gloria storm rainfalls affected Catalonia from 20 to 23 January 2020 and triggered multiple landslides, some of which affected buildings and infrastructures (such as roads and railways). This paper presents the rainfall and landslide datasets collected during the event, and evaluates the performance of a regional landslide early warning system (LEWS) during the Gloria storm applying a fuzzy verification method. The majority of the inventoried landslides can be classified as slides, involving a limited volume of sediment (up to 10 m3), and were triggered in cut slopes along linear infrastructures. Rainfall accumulations were significant in the whole region, especially in the Montseny area, where over 450 mm were registered in 96 h. Generally, the LEWS computed moderate and high warnings in the areas where large rainfall amounts were recorded, and showed good correspondence with the locations where landslides were reported. The fuzzy verification method has been applied using neighbouring windows of different sizes to obtain scale-dependant information on the LEWS performance. The skill of the LEWS considerably improves when enlarging the neighbouring window size from 500 m to 1 km.
CitationPalau, R. [et al.]. Application of a fuzzy verification framework for the evaluation of a regional-scale landslide early warning system during the January 2020 Gloria storm in Catalonia (NE Spain). "Landslides", 22 Març 2022, p. 1-18.
URIhttp://hdl.handle.net/2117/366674
DOI10.1007/s10346-022-01854-2
ISSN1612-5118
Publisher versionhttps://link.springer.com/article/10.1007/s10346-022-01854-2
Collections
Share: