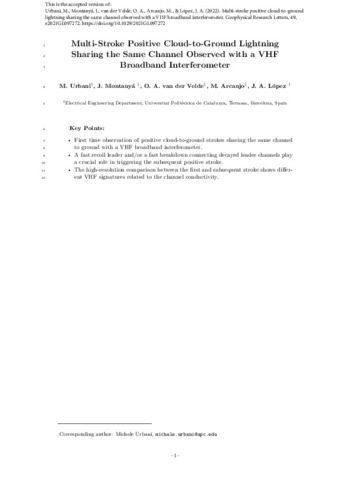 Document typeArticle
Rights accessOpen Access
Abstract
In the same lightning flash, whose usual duration is less than a second, there can be multiple negative cloud-to-ground strokes with different terminations or following a preexisting channel to the ground. In contrast, it is not common to have multiple positive cloud-to-ground (+CG) strokes, and especially multi-stroke +CG flashes sharing the same channel to ground are very rarely observed. This polarity asymmetry is not well understood and many aspects are debated. In this letter, we present for the first time a very high frequency (VHF) radio band observation of a multi-stroke +CG flash along the same channel, observed simultaneously by a VHF broadband interferometer and a Lightning Mapping Array in north-central Colombia. These combined observations have unprecedented temporal and spatial resolution and allowed us to observe in detail the development of the flash and especially to understand the initiation mechanism of the subsequent positive stroke.
CitationUrbani, M. [et al.]. Multi-stroke positive cloud-to-ground lightning sharing the same channel observed with a VHF broadband interferometer. "Geophysical research letters", 15 Abril 2022, vol. 49, núm. 9, p. 1-10.
URIhttp://hdl.handle.net/2117/366611
DOI10.1029/2021GL097272
ISSN0094-8276
Publisher versionhttps://agupubs.onlinelibrary.wiley.com/doi/10.1029/2021GL097272
Collections
Share: