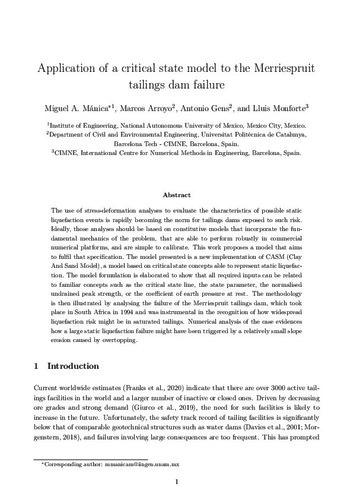 Monforte Vila, Lluís
Document typeArticle
Rights accessOpen Access
All rights reserved. This work is protected by the corresponding intellectual and industrial property rights. Without prejudice to any existing legal exemptions, reproduction, distribution, public communication or transformation of this work are prohibited without permission of the copyright holder
Abstract
The use of stress–deformation analyses to evaluate the characteristics of possible static liquefaction events is rapidly becoming the norm for tailings dams exposed to such risk. Ideally, those analyses should be based on constitutive models that incorporate the fundamental mechanics of the problem, are able to perform robustly in commercial numerical platforms and are simple to calibrate. A model that aims to fulfil that specification is proposed. The model is a new implementation of a previously proposed model based on critical state concepts that is able to represent static liquefaction. The model formulation is elaborated to show that all the required inputs can be related to familiar concepts such as the critical state line, the state parameter, the normalised undrained peak strength or the coefficient of earth pressure at rest. The methodology is illustrated by analysing the failure of the Merriespruit tailings dam, which occurred in South Africa in 1994 and was instrumental in the recognition of how widespread liquefaction risk might be in saturated tailings. Numerical analysis of the case showed how a large static liquefaction failure might have been triggered by a relatively small slope erosion caused by overtopping.
CitationMánica, M. [et al.]. Application of a critical state model to the Merriespruit tailings dam failure. "Proceedings of the Institution of Civil Engineers. Geotechnical engineering", Abril 2022, vol. 175, núm. 2, p. 151-165.
URIhttp://hdl.handle.net/2117/366564
DOI10.1680/jgeen.21.00001
ISSN1353-2618
Publisher versionhttps://www.icevirtuallibrary.com/doi/abs/10.1680/jgeen.21.00001
Other identifiershttps://www.researchgate.net/publication/354785955_Application_of_a_critical_state_model_to_the_Merriespruit_tailings_dam_failure
Collections
Share: