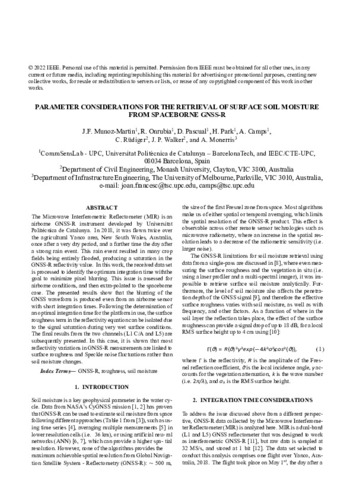 Except where otherwise noted, content on this work is licensed under a Creative Commons license : Attribution-NonCommercial-NoDerivs 3.0 Spain
Abstract
The Microwave Interferometric Reflectometer (MIR) is an airborne GNSS-R instrument developed by Universitat Politècnica de Catalunya. In 2018, it was flown twice over the agricultural Yanco area, New South Wales, Australia, once after a very dry period, and a further time the day after a strong rain event. This rain event resulted in many crop fields being entirely flooded, producing a saturation in the GNSS-R reflectivity value. In this work, the received data set is processed to identify the optimum integration time with the goal to minimize pixel blurring. This issue is assessed for airborne conditions, and then extra-polated to the spaceborne case. The presented results show that the blurring of the GNSS waveform is produced even from an airborne sensor with short integration times. Following the determination of an optimal integration time for the platform in use, the surface roughness term in the reflectivity equation can be isolated due to the signal saturation during very wet surface conditions. The final results from the two channels (L1 C/A and L5) are subsequently presented. In this case, it is shown that most reflectivity variations in GNSS-R measurements are linked to surface roughness and Speckle noise fluctuations rather than soil moisture changes.
CitationMuñoz, J. [et al.]. Parameter considerations for the retrieval of surface soil moisture from spaceborne GNSS-R. A: IEEE International Geoscience and Remote Sensing Symposium. "IGARSS 2021, 2021 IEEE International Geoscience and Remote Sensing Symposium: 12-16 July, 2021, virtual symposium, Brussels, Belgium: proceedings". Institute of Electrical and Electronics Engineers (IEEE), 2021, p. 2009-2012. ISBN 978-1-6654-0369-6. DOI 10.1109/IGARSS47720.2021.9554196.
URIhttp://hdl.handle.net/2117/366286
DOI10.1109/IGARSS47720.2021.9554196
ISBN978-1-6654-0369-6
Publisher versionhttps://ieeexplore.ieee.org/document/9554196
Collections
Share: