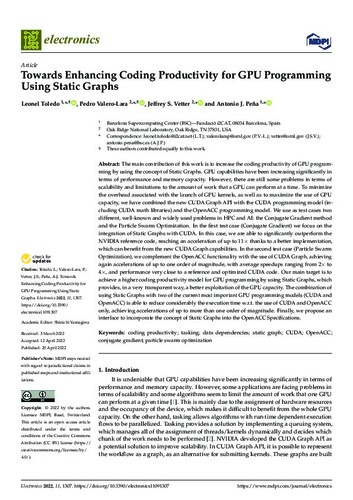 Salvo que se indique lo contrario, los contenidos de esta obra estan sujetos a la licencia de Creative Commons : Reconocimiento 3.0 España
ProyectoEPEEC - European joint Effort toward a Highly Productive Programming Environment for Heterogeneous Exascale Computing (EPEEC) (EC-H2020-801051)
Resumen
The main contribution of this work is to increase the coding productivity of GPU programming by using the concept of Static Graphs. GPU capabilities have been increasing significantly in terms of performance and memory capacity. However, there are still some problems in terms of scalability and limitations to the amount of work that a GPU can perform at a time. To minimize the overhead associated with the launch of GPU kernels, as well as to maximize the use of GPU capacity, we have combined the new CUDA Graph API with the CUDA programming model (including CUDA math libraries) and the OpenACC programming model. We use as test cases two different, well-known and widely used problems in HPC and AI: the Conjugate Gradient method and the Particle Swarm Optimization. In the first test case (Conjugate Gradient) we focus on the integration of Static Graphs with CUDA. In this case, we are able to significantly outperform the NVIDIA reference code, reaching an acceleration of up to 11&times; thanks to a better implementation, which can benefit from the new CUDA Graph capabilities. In the second test case (Particle Swarm Optimization), we complement the OpenACC functionality with the use of CUDA Graph, achieving again accelerations of up to one order of magnitude, with average speedups ranging from 2&times; to 4&times;, and performance very close to a reference and optimized CUDA code. Our main target is to achieve a higher coding productivity model for GPU programming by using Static Graphs, which provides, in a very transparent way, a better exploitation of the GPU capacity. The combination of using Static Graphs with two of the current most important GPU programming models (CUDA and OpenACC) is able to reduce considerably the execution time w.r.t. the use of CUDA and OpenACC only, achieving accelerations of up to more than one order of magnitude. Finally, we propose an interface to incorporate the concept of Static Graphs into the OpenACC Specifications.
CitaciónToledo, L. [et al.]. Towards enhancing coding productivity for GPU programming using static graphs. "Electronics", 2022, vol. 11, núm. 9, 1307.
URIhttp://hdl.handle.net/2117/366130
DOI10.3390/electronics11091307
ISSN2079-9292
Versión del editorhttps://www.mdpi.com/2079-9292/11/9/1307
Colecciones
Comparte: