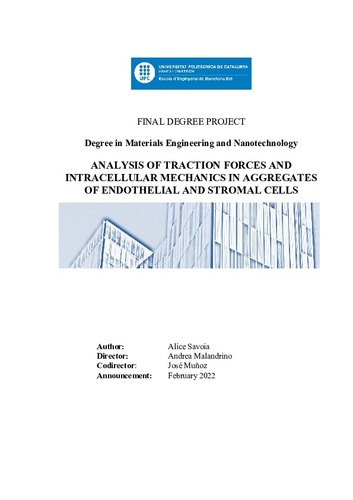 Document typeMaster thesis
Rights accessOpen Access
Abstract
Animal cells sense and transduce physical forces. In everyday physiological activities, tissues composed by groups of cells interacting together can stretch significantly, for instance when heart pumps, or lung inflate during breathing. Evidence also show that altered cell mechanosensing and mechanotransduction occurs in pathologies, such as cancer. These cell mechanics events can be studied in simplified 2D in vitro systems, where forces exerted by cells are measured with accuracy. One commonly used technique is 2D traction force microscopy (TFM), which makes use of high-resolution microscopy and fluorescently decorated elastic culture substrates to measure the substrate displacement caused by cell forces. In a previous study, we have built on analysis pipelines that convert displacement into tractions, to further obtain computationally the intracellular (cytoskeletal) structural organization that could give rise to such forces, starting from TFM data on single cells. For that, we have solved an elastic minimization problem assuming that intracellular stresses are propagated in cable-like elements and seeking a mechanical equivalence leading to the experimentally measured tractions. However, our previous work and other research in experimental literature have not focused on more realistic situation, such as intracellular organization when multiple cell types are interacting. Our experiments show that distinct cell types, endothelial and fibroblasts exert different level of forces on the substrate. Moreover, by varying the stiffness of the substrate, we measured an increase of the spreading area for both endothelial cells and fibroblasts, as stiffness increases, up to a plateau. Finally, as a proof of concept, we obtained computationally the intracellular organization for a case of traction field produced by iv several endothelial cells interacting and observe a possible mechanical communication between cells by transmission of intracellular forces.
SubjectsCells -- Mechanical properties, Cèl·lules -- Propietats mecàniques
DegreeMOBILITAT INCOMING
URIhttp://hdl.handle.net/2117/366103
Collections
Share: