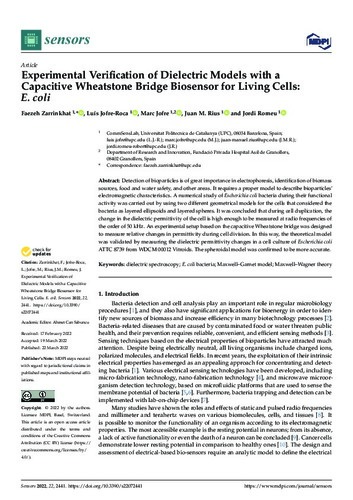 Document typeArticle
PublisherMultidisciplinary Digital Publishing Institute (MDPI)
Rights accessOpen Access
Abstract
Detection of bioparticles is of great importance in electrophoresis, identification of biomass sources, food and water safety, and other areas. It requires a proper model to describe bioparticles’ electromagnetic characteristics. A numerical study of Escherichia coli bacteria during their functional activity was carried out by using two different geometrical models for the cells that considered the bacteria as layered ellipsoids and layered spheres. It was concluded that during cell duplication, the change in the dielectric permittivity of the cell is high enough to be measured at radio frequencies of the order of 50 kHz. An experimental setup based on the capacitive Wheatstone bridge was designed to measure relative changes in permittivity during cell division. In this way, the theoretical model was validated by measuring the dielectric permittivity changes in a cell culture of Escherichia coli ATTC 8739 from WDCM 00012 Vitroids. The spheroidal model was confirmed to be more accurate.
CitationZarrinkhat, F. [et al.]. Experimental verification of dielectric models with a capacitive wheatstone bridge biosensor for living cells: E. coli. "Sensors (Switzerland)", 23 Març 2022, vol. 22, núm. 7, p. 2441:1.
URIhttp://hdl.handle.net/2117/366007
DOI10.3390/s22072441
ISSN1424-8220
Publisher versionhttps://www.mdpi.com/1424-8220/22/7/2441
Collections
Share: