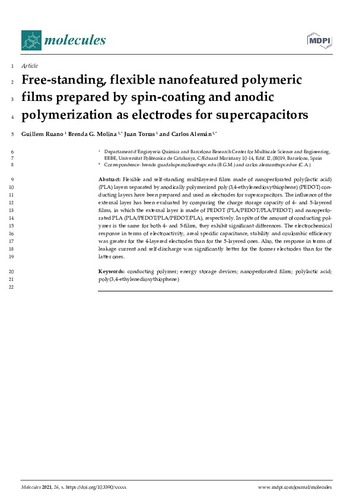 Except where otherwise noted, content on this work is licensed under a Creative Commons license : Attribution 4.0 International
Abstract
Flexible and self-standing multilayered films made of nanoperforated poly(lactic acid) (PLA) layers separated by anodically polymerized poly(3,4-ethylenedioxythiophene) (PEDOT) conducting layers have been prepared and used as electrodes for supercapacitors. The influence of the external layer has been evaluated by comparing the charge storage capacity of four- and five-layered films in which the external layer is made of PEDOT (PLA/PEDOT/PLA/PEDOT) and nanoperforated PLA (PLA/PEDOT/PLA/PEDOT/PLA), respectively. In spite of the amount of conducting polymer is the same for both four- and five-layered films, they exhibit significant differences. The electrochemical response in terms of electroactivity, areal specific capacitance, stability, and coulombic efficiency was greater for the four-layered electrodes than for the five-layered ones. Furthermore, the response in terms of leakage current and self-discharge was significantly better for the former electrodes than for the latter ones.
CitationRuano, G. [et al.]. Free-standing, flexible nanofeatured polymeric films prepared by spin-coating and anodic polymerization as electrodes for supercapacitors. "Molecules (Basel, Switzerland)", 2 Juliol 2021, vol. 26, p. 4345:1-4345:13.
URIhttp://hdl.handle.net/2117/365767
DOI10.3390/molecules26144345
ISSN1420-3049
Publisher versionhttps://www.mdpi.com/1420-3049/26/14/4345
Collections
Share: